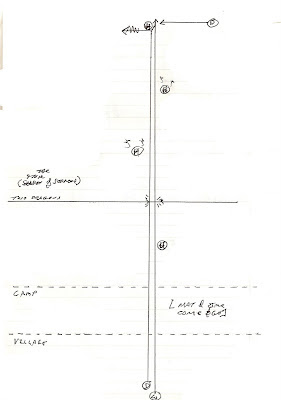 Diagram 12. I'm going to have to be coy here, I'm afraid. If I explained everything, it would give away enough of the plot to ruin the novel. NeverthelessI've finally got a clear idea of how the structure of the entire novel runs from beginning to end, and can see it whole. From bottom to top:

(The Stone of Sorrow)

Nat and Esme do come and go, I'm afraid. Neither were meant to be as important to the novel as they became. But they did as they wished and sort of took over.

The little sigil bracketing the two (symbol)s that looks like a capital S with quote marks on its upper curve is a bit of shorthand I invented when I was in college. It means either "not to be taken literally" or "not to be taken seriously." If you were plotting out Huckleberry Finn in diagram, for example, the Duke and the Dauphin would be marked with them, to indicate they weren't really royalty. Years later, reading one of Samuel R. Delany's essays, I realized that I'd created the "irony mark" that he wished English punctuation contained.

The "two dragons" scene didn't actually make it into the final draft -- too heavy-handed, I'm afraid. But there at the top, where an arrow pointing outward is scribbled over and an arrow pointing inward is added, you can see me changing the ending right there on the spot. Much for the better, I might add. So all this diagramming proved to be useful after all!

The "Stone of Sorrow" was originally "Season of Sorrow." (If I'd kept with the plot I originally planned, one phrase or the other would have been a chapter title.) The original Stone of Sorrow is a fallen standing stone in a churchyard in the West of Ireland. Sleeping on it overnight was a folk-cure for heartbreak and so in the Nineteenth Century many an emigree spent their last night there before departing for America, never to return. I visited the churchyard and lay down on the stone, and I felt all the sorrow in the world flow into my body. Someday I'm going to write that story.