I’m either in China right now, or on the plane to Chengu. But that doesn’t matter, because I arranged for my son Sean to post this, the second in a series of diagrams I used to help plot out The Dragons of Babel.

(Er, actually, he's in Chicago. Apparently his flight was canceled because shrimp ate the wiring in the engines, or something, so his entire trip to China is pushed back twenty-four hours. Viva airtravel! --Sean)

Diagram 2. There are actually two diagrams here. Both are simpler than the first one was, and the larger of the two is almost a doodle, but I’ve introduced characters and that’s a step forward. The spiral in the big diagram represents the protagonist’s voyage through the novel from beginning (the base) to end (the peak). The metaphor of rising through the Tower of Babel to its very tip will later become literal. 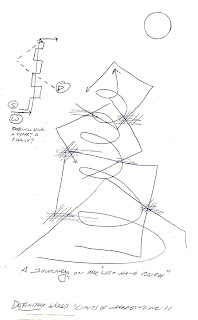 The smaller diagram tracks three characters through a section of the novel. Each line represents one character. The line that goes straight, top to bottom, is Will le Fey, the protagonist. When lines of other characters travel alongside his both characters are in the plot. When lines diverge, one goes away. A slanting line suggests a character off on a plot of his or her own who only intersects with the protagonist’s plot for one event or scene.

The W stands for Will, the protagonist. The S is for a sister who never materialized. And of course the D is for the dragon. And the circle? That’s the moon. It represents all that is unobtainable, everything that can never be known or achieved or realized. Which is a lot of what this novel is secretly about.

I never said I wasn’t pretentious.

Does Will have a sister? A family?

A Journey on the “Left-Hand Path”

Annotations:
As it turns out, Will has no sister. The question of family is a lot more complicated than it looks.

Note that for the “left-hand path,” I carefully made the spiral counter-clockwise.

“Limits of Understanding” is a wonderful drawing by one of my favorite authors, which I’ve only seen reproduced in a mass-market paperback on Karl Jung. I spent months trying to find a better copy of it in art books and the Web. To no avail.
Posted by Michael Swanwick at 11:17 PM

hiss of the dragon said...

That’s the moon. It represents all that is unobtainable, everything that can never be known or achieved or realized.