A Week Without Magic 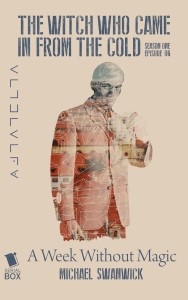 The writers working on The Witch Who Came In From the Cold meet on Skype to hash out the plot and make sure all their episodes support each other and lead naturally into one another -- did you know that? I was a part of one of these meetings but because electronica do not like me, while I was able to see and hear what everybody had to say, I could not make my microphone work and so my contributions were limited to text messages: HA HA THAT'S GOOD and I CAN CHANGE THAT, NO SWEAT.

Which was a pity because it was a very warm and supportive group. Lots of laughter. Lots of good ideas. If meetings had been like that when I held down an office job...

Anyway, this week, my episode, "A Week Without Magic" goes live. You can buy (and previous episodes) here.

You can read a quick interview with me, and discover my favorite quotation, here.

And as part of the project, there's a thing called From the Writers' Room, where each of the writers reflects on her or his episode. I believe mine will be posted later today. You can read it (and the others) here.

Simultaneous with all this comes the news that Serial Box is "parnering" (as they say) with SAaga Prss at Simon & Schuster to release the print version of the first season of TWWCIFTC in print format. The book containing Season One will hit the stores in the summer of 2017, shortly after the second season wraps up.

This is also good news for fans of two other Serial Box projects: Bookburners (about the Vatican's black-ops anti-magic squad) and Tremontaine. The latter is a prequel to Ellen Kushner's fantasy classic Swordspoint and the last time I saw Ellen, she was almost giddy with how much fun she and her team were having with it.


Posted by Michael Swanwick at 9:15 AM

MS: Like the cover art -- who did it? Are they doing the interiors too?

The PDF of the chapter says the artist is Mark Weaver, I think this is his website: http://www.mrkwvr.com/