My Story -- and What's Wrong With It 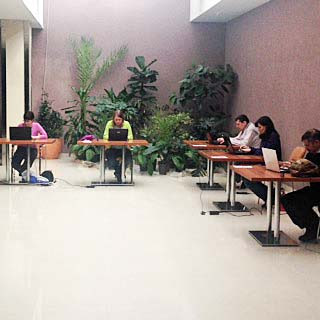 What do people do for fun in Russia?

How about write a story in an hour? I am not making this up. At Roscon, the Russian national science fiction convention, I saw a line of serious young people tapping away at a line of laptops. They were given a list of five themes created by writer Eugeny Lukin, pulled a number out of a hat to see which one they had to write on, and set to work. There were more people involved than the photo above suggests, too. When one group finished, the next group stepped in.

I didn't exactly volunteer to take part in the competition. But somehow I found myself behind a laptop.

The theme I was given was "The End of the World 2." Which, it was explained to me, was the apocalypse that occurs after the world has already ended.

I've got to say that apocalypse fiction is no longer my cup of meat. That's a theme for young writers, I think. But I set to work. And I finished my story in the hour given me. It began:

Terraforming Mars was a snap by comparison. We’d brought in iceteroids and slammed them into the planet where we wanted oceans to be. We sailed enormous mirrors, tacking back and forth across its orbit to heat up the surface. We manufactured greenhouse gases. We seeded the soil with microbes, designer worms, and intelligently-designed ants. Start to finish, it took only five thousand years.

By the time Mars was done, Earth was uninhabitable.

You can read the entire story in English or Russian here.

So what are the story's major deficiencies? Well...

1. The opening paragraphs. You're expecting me to say that opening with an info-dump is wrong. Not so! You need only look at Larry Niven's early short stories, which often began with a brief science lesson necessary for the reader to understand what follows, and which worked just fine. Or at the way Rod Serling opened each Twilight Zone episode with a short chat that cut out twenty minutes narrative exposition so the show could cut straight to the exciting parts. Info-dumps are a useful, if commonly maligned, tool.

No, what's wrong is that, not having looked into terraforming for several decades, I have only the haziest sense of of how it would work. Eukaryotes are involved, I believe, but how and at what stage are beyond me. And since there was no public wi-fi at the convention hotel, I couldn't look it up online. So the first significant flaw is: insufficient research.

2. The time-span. Originally, I had the terraforming take fifty thousand years, which I suspect is pretty fast for completely altering an entire planet. But then I realized that fifty thousand years was too long a period to have people similar to contemporary humans and one hour was too short a time to write something long enough to establish a radically different society. So I cheated and cut the time scale down by an order of magnitude.

If you've got a good enough story going, the reader will forgive this sort of thing. But, really, it's playing with the net down.

3. The immortals. To dramatize the predicament these people are caught in, I had to have one of them recently come to realize with despair that Earth could not be terraformed. But if they've been working on this for thousands of years and human lifespans are still what they are now, the characters would have been born into a hopeless situation and know it already. I made them immortals who had been caught up in the details of their work for too long. This is kind of a cheat, since it's not implicit in the original idea.

The characters are also ciphers. But that's okay for this kind of story. Not every work of fiction needs to be Remembrance of Times Past.

4. The ending. I pulled in an aliens ex machina there, simply because the clock was ticking and I could think of no other way to come up with an interesting ending. Or, rather, to do so would have required a much longer story and there simply wasn't the time.

You can get away with this sort of thing if the story is entertaining enough. Someone will buy it, readers will enjoy it well enough, and then it will be forgotten. But if you aspire to "honor, power, riches, fame, and the love of women," as Freud put it (substitute "men" for "women," if you wish), then you have to aim higher and try harder.

I came in second in the competition, by the way, which is an honorable rank. I don't think anybody -- myself included -- would have been happy if an outsider had walked away with first place.

Wow, no public wi-fi! That must have been a shock.

I explains why I didn't blog from Russia.