The Witch Who Came In From The Cold 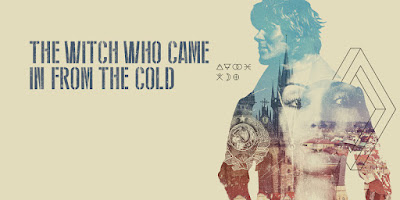 My newest project is definitely a departure for me -- I agreed to play in someone else's universe. I've done collaborations enough in my time, and the pastiche or two, to be sure. But writing an episode for The Witch Who Came In From the Cold was a very different experience. from those.

For one thing, Serial Box, the publisher, has an intriguing approach to their ebooks, more akin to television than to traditional publishing. The books are published serially, one episode a week. This requires several writers working in the same voice, with a lot of oversight and several passes of editing for each text.

So there was a great deal of work to do and it all had to be done on schedule. Luckily, though, the project was a hoot.  From the press release:

Through a haze of cigarettes and vodka in Prague, deep in the heart of the Cold War, a special force of spies rely on sorcery to win their games of intrigue…

While the world watches the bitter rivalry between East and West fester along the Iron Curtain, the Consortium of Ice and the Acolytes of Flame continue waging their ancient war of magic. Kept to the shadows, this secret contest crosses the lines of politics and the borders of nations with impunity – the intrigues of spies may know clear sides but the battles of witches spill out over all. Tanya Morozova is a KGB officer and the latest in a long line of Ice witches and sorcerers; Gabe Pritchard is a CIA officer and reluctant Ice recruit. Enemies at one turn, suspicious allies at the next, their relationship is as explosive as the Cold War itself.

The premise was fun, but I doubt I would have signed on if I didn't like characters. Tanya makes for a great lead -- smart, honest, ruthless, and totally unaware of how badly she is in need of a sense of humor. Gabe, who ends up being her foil more often than he would like,  has perhaps too much of a sense of humor for his own good. The secondary characters are well-drawn and interesting to boot.

The writer I heard mentioned most often in discussions of how the writing should go was, of course, John Le Carré, he being the master of this sort of thing. But I also kept thinking of Sergei Lukyanenko's Night Watch books because, as in them, one side of the battle is definitely the Bad Guys. But the moral status of their opponents is iffy at best.

The Lead Writer for the series is Lindsay Smith. The other writers are Ian Tregillis, Cassandra Rose Clarke, Max Gladstone, and, for Episode 6 only... me.

The series has gone life and my episode, A Week Without Magic, is coming up soon. If this sounds like your sort of thing, it's available via SerialBox.com, the Serial Box Publishing iOS app, and wherever ebooks and audiobooks are sold.  Or you can just click here.