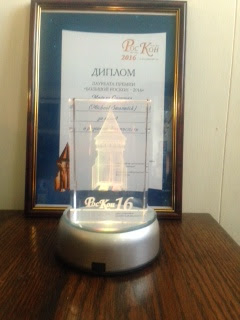 One of them I know already, however. It's the Grand Roscon Award for achievement in science fiction. Which this year went to... me.

You have no idea how humbling it is to receive such a thing in a country that is home to Isaac Babel, Victor Pelevin, Anna Akhmatova, and the Strugatsky Brothers.

And now back to battling jet-lag. I'll have more to say about Roscon in the coming week.

It's not just an award, it's a diploma. Says so right up top.

WooHOO! Congratulations. Could not have been awarded to a more deserving recipient!