One Last Plug and I'm off to Russia! 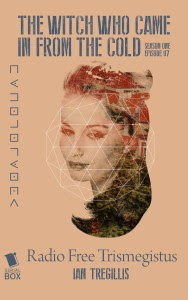 There's a certain irony to packing for Russia so soon after my episode for The Witch Who Came In From the Cold was published. All I can say in my behalf is that Tanya, the Russian magic-wielder and KGB agent who is indisputably the hero of this series (sorry, Gabe!), is also the closest thing there is to a Good Guy in this battle of ideologies-and-sorcery. So at least I'll arrive in Moscow with clean hands.

Over at the Serial Box blog, Ian Tregillis has some kind things to say about me. Apparently he was worried about what I might do in my episode. And I understand that perfectly. It would have been the easiest thing in the world to bring in something unexpected, something disruptive, something that would be a real pain in the butt for him to deal with... But that's not the way this sort of game is played. Each episode builds on the previous ones and builds toward the next.

Anyway, the other writers are all likable guys. I got a kick out of working with them. So, no, I played nice.

More importantly, as Ian says in his post, episode 6 was basically the last of the set-up episodes. By the end of it, you know who everybody is, what kind of people they are, what powers are in play, and what's at stake. So now the game begins for real. As Ian wrote:

At this point we're transitioning into the second half of the season: we've almost pushed the boulder all the way to the top of the mountain. A few more nudges, and that sucker will be unstoppable. So my job in "Radio Free Trismegistus" was to clear the path for the avalanche by kicking a few pebbles down the hill.

This is a crucial moment in a plot-driven story. It's the still moment of  equipoise when the reader has put together what's going on and can anticipate how things are going to fall together -- or, as may very well be the case, apart.

From this point on, the series depends on how well the writers can satisfy the readers' expectations while simultaneously confounding them with surprising developments.

Can the Cold Witch gang do it? My money says yes.

On Wednesday I fly to Moscow for Roscon, the Russian national science fiction convention. I speak no Russian, alas, but I'll have a friend with me who can translate.ds

So if you're going to be there, be sure to say hello. I'd be delighted to meet you.


Posted by Michael Swanwick at 3:04 PM

Have a happy trip. And remember to keep Georgia on your mind!