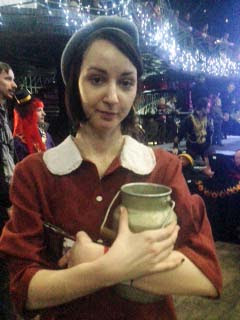 «Annushka has already bought the sunflower oil, and has not only bought it, but has already spilled it. So the meeting will not take place...»

Media cons are new to Russia -- the media half of Roscon is only the second such convention in that country, I was told. But the fans took to it immediately, and the costumes were as good as any I've seen anywhere.

And then there's Annushka (above), who introduced herself to me by asking if I'd read The Master and Margarita.

Have I read Mikhail Bulgakov's masterpiece? On my first stay in Moscow, immediately after unpacking our bags in our Garden Ring flat, the first thing Marianne and I went to see was Red Square. Then we went to Patriarch's Ponds, the city park where the novel opens. The editor Berlioz is talking with the young poet Ponyrev when the Devil walks up and deals himself into the conversation, casually mentioning that on of them will soon be decapitated.

Offended, Berlioz hurries away and, as was obliquely predicted, slips on the sunflower oil that Annushka had spilled and falls headfirst in front of an oncoming trolley.

Thus begins the wild ride that is one of the great fantasies of the Twentieth Century.

The woman who was Annushka, it turned out, belongs to a fan group dedicated to promoting the novel and its author. In addition to which, they engage in a certain amount of cosplay as its characters.

This is yet another reason why Russia is a great country.

We arrived in Moscow late in the afternoon and after visiting Red Square and Patriarch's Ponds, it was time to buy some food for supper in our flat. But rather than head back directly, Marianne and I took a roundabout way, so we wouldn't be traveling on the same streets over and over. As we went, we consulted our guidebook to see what we were passing. One thing we saw was the Tunisian Embassy, which had formerly been Lavrentiy Beria's house. Beria was a very bad man. According to the book, when the yard was dug up to replace some plumbing, human bones were found. When a basement wall was knocked down to renovate the area, it was found to be filled with... more human bones.

Midway back to our flat, we passed Bulgakov's apartment. Which meant that all the time he was writing about the Devil in Moscow, he was only a short walk from where Beria lived.

This is yet another reason why the Soviet Union was a terrifying place.

Don't slip in that oil!

The world is changing fast. people are also being transformed.day by day we are becoming more dependant on degital system.you are making me think of this really.You have a great method of sharing your thoughts