When Is A Martini Not A Martini? 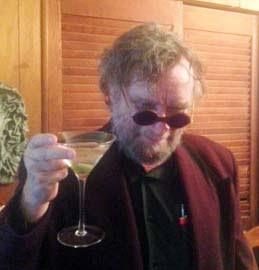 Here at the American Martini Laboratory, we have long fought the good fight against all manner of faux Martinis. These are alcoholic concoctions which have taken on the sacred name of the World's Most Perfect Cocktail, despite containing:

Chocolate
Umbrellas
Pink Stuff
Gummy Worms
Flavored Schnapps
Any Liquor at all other than Gin, Dry Vermouth, or (but only on occasion) orange bitters
Any garnish at all other than olives or a thin twist of lemon rind

Otherwise worldly philosophers have suggested that Martinis come in two varieties -- gin and vodka. This heresy has been rejected by the AML's deeper drinkers, who have up to now declared that a Martini made with vodka is not only tasteless but a different drink altogether -- a "Vodkatini."

New research reveals that the so-called "vodka martini" was invented sometime around 1950 and was originally called a "Kangaroo."

A Kangaroo. Could there be a more fitting humiliation for a drink that dared aspire to the name of the King of Cocktails? Just as there can be only one T. rex, and one Elvis... there can be but one Martini.

You can read about the history of the Great Pretender here.

And a drink with gin, dry vermouth, and an olive that is shaken, not stirred, isn't a Martini. It's a Bradford.

You'll be pleased to know that EJ and I broke the nephew in on the perfect cocktail this evening. Bombay, M&R dry, two olives. Chilled glasses and very shaken.

There is a great deal of ambient sophistication here.