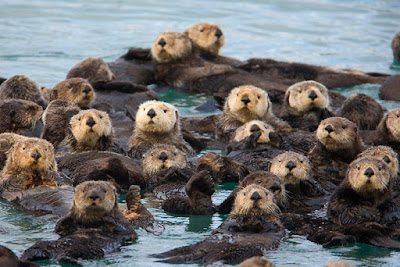 Life goes on. Last night, I went to a reading by Lawrence Schoen from his new novel, Barsk: The Elephants' Graveyard. During the questions and comments period somebody from his writers group mentioned that in an earlier draft, he had had "otters out of nowhere," which everyone insisted he remove. It was implied that there was no way those otters could be made to fit into a story. So what the heck. Right here, right now, before breakfast, I'm going to give it a whack:

Otters Out of Nowhere

It was the otters from nowhere that first let us know that reality was not what we thought it was. Followed by the massive clouds of orange balloons over the Arctic. The appearance of a giant statue of a croquet player across the river from the Gateway Arch in St. Louis. The morning everybody in Ireland woke up wearing (removable, thank goodness!) red clown noses.

A great deal of research later, we have determined that Somewhere there is a control room where reality is manipulated, or perhaps orchestrated is the better term. From it, Somebody or Something is able to adjust the parameters of our existence.

Further, responsibility for the control room periodically passes from one Entity to another, and the times reflect the personality of Whomever is in control. This is why historical eras differ so greatly from one another. This is why the era of Greek philosophy and literature is so unlike that of the Hundred Years War. This is why the inspiring figures of the American Revolution were followed by an era of scoundrels.

This is why yesterday Mount Rushmore turned to lime jello. Reality is currently being run by a practical joker. And not a very funny one. Just look at Its works!

Don't even get me started on Donald Trump.


Above: For Lawrence Schoen. Beware of elephants bearing knives.