The Toughest True Words You'll Ever Read on Writer's Block 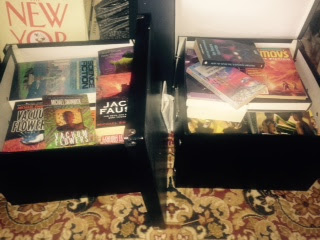 Writer's block -- real blockage, I mean, not simply being stuck on a particular story or not having any idea of what to write next, but the inability to write anything worthwhile, no matter how much effort you put into it -- is one of the most terrifying things that can happen to a writer.

I know this because roughly thirty-five years ago, after making several sales and seeing my first two published stories appear on the Nebula ballot, I came down with a world-class case of it. Every day I sat down at my Selectric and typed until I had several pages that went nowhere, accomplished nothing, and had to thrown away. Day after day, it was the same story. Over and over and over again.

Fortunately, there are a lot of ways to relieve writer's block.

Unfortunately, most of them don't work.

I tried them all. I followed Raymond Chandler's advice and had a man with a gun walk into the room. "Holy cow, he's got a gun!" one of my characters cried. Another said something else. And several pages later, the plot had gone nowhere and the prose had accomplished nothing and every word of that day's work had to be thrown away. I tried a lot of other sure-fire tips as well. None of them worked.

Day after day. Month after month. Something in my subconscious did not want me to write and would not let me write. For nine months. During which, I also lost my job and got married.

There's a happy ending to this story. I finally found the cure. I kept writing, every day and as hard as I could, despite not getting any results until finally my subconscious got the message that preventing me from doing any productive writing was not going to get it out of sitting in front of the typewriter and typing for hours every day. So it gave up.

Here is the hard and simple truth: All those tricks may work for some writers at some times. None of them are reliable. The only thing that really works is to keep on writing. Even though you hate it. Even though every word you write is dreadful. Even though you loathe the sight of the trash you're creating. You have to keep on keeping on.

Even worse, though it worked for me, it is not guaranteed to work for everybody every time. Nothing is.

But if you don't keep on writing...


Above: I'm boxing up some of my duplicate publications to go into the attic. These are a small fraction of them.

Heartening advise from an expert writer.

I am reminded of Bradbury's advice, something along the lines of: If you want to become a writer, sit down at the typewriter and write. 2000 words a day. Every day. For the rest of your life. Eventually you will write all the crap out of your system and start reaching the real stories.

Good advice. It separates the writers from the lazy. I will not admit which camp I fall into.

And, reading your stories, I am very glad you kept writing!