David G. Hartwell: In Search of the Holy Grail 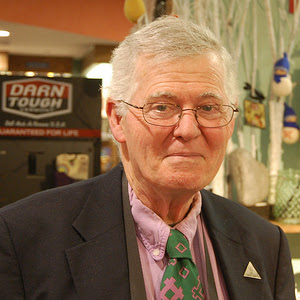 Photo by and Copyright © Andrew I. Porter


I was in Chicago a couple of years ago for Gene Wolfe's induction into the literary hall of fame there when the phone rang and David Hartwell said, "I'm sitting in Fred Pohl's kitchen with him, going through J. K. Klein's photos, looking for pictures of old time writers. Do you want to join us?"

You bet I did.

I think back to that brief call and I can hear him grinning. The joy in his voice was infectious. That was the key to David G. Hartwell: he loved science fiction, he loved work, he loved making worthwhile things happen. The photos were for an expanded version of The Way the Future Was, which I don't think Fred lived to finish. Even if he had, he would have gotten no credit for those hours spent going through literally thousands of black-and-white photos in search of the rarely seen, and he knew it. This is the core condition of an editor: to get credit for only a fraction of what you do. Those who cannot live with that fact quickly move on to some other line of work.

But, David being David, he had an ulterior motive as well. "I'm searching for the Holy Grail," he said. "I know it's in here somewhere..."

Now David Hartwell is no more.

There is some confusion as to whether he's technically dead yet. And it seems unclear whether bleeding in the brain caused him to fall down a flight of stairs or the fall caused the bleeding. But the doctors hold out no hope that he will ever regain consciousness. So my friend is gone.

Christ, I'll miss him. Every year at Readercon we used to meet in the bar while everybody else was at the Kirk Poland Memorial Bad Prose Competition and have a serious conversation about the art of science fiction. Talking about the current state and literary potential of our genre. David had no interest in the competition, hilarious though everybody said it was. "I've read enough bad prose in my life that I don't need to seek out any more," he told me.

Yeah, me too, David.

The list of things he's done -- just those I know about -- would go on forever. Here's an extremely abbreviated version: He was a book reviewer for Crawdaddy, edited The Little Magazine, co-founded The New York Review of Science Fiction and the NYRSF Readings series (both of which will continue after him), chaired the board of directors of the World Fantasy Convention and administered the Philip K. Dick Award. Mostly, he edited. He edited the Year's Best SF series, and a number of magisterial anthologies -- "bug-crushers" is the technical term -- on Hard SF, Sword & Sorcery, Twentieth Century and early Twenty-FIrst Century SF, Horror, and so on. He found and nurtured a many great writers. He edited Gene Wolfe's Book of the New Sun series. He was a book dealer, huckster, and collector. At various times, he filled pretty much every ecological niche in the publishing world.

He loved science fiction and he worked all his adult life in and for it.

And -- let it be said here -- he found the Holy Grail. Near the end of that long morning spent hunched over Fredrick Pohl's kitchen table, David Hartwell cried "Eureka!" and, luminously happy, held high the photograph he had been searching for. It was a photo of the young William Gibson at his very first science fiction convention, which he had convinced his mother to drive him to,. He was dressed as the Lizard King.

I don't know where that photo is now. You'll probably never get to see it. And that's the absolutely smallest reason that your world is the poorer for not containing David G. Hartwell anymore.


Above: David. Smiling. That's the way he should be remembered.

This is terrible news. I like to think that he was my friend, too, as well as my editor. He was wonderfully funny and insightful. He also had a prodigious memory. When going over a manuscript, he made no use of notes but would tell me from memory even the page number of problematic passages. He was well known for his sartorial elegance and once was complimented: "David, many of the colors in your tie match many of the colors in your shirt." At which he smiled, hugely.

Thank you for writing such a lovely tribute.

An absolutely terrific piece, Michael - a wonderful anecdote that captures the essence of the man. I'm still awfully busted up over his loss, his death, his exit, but pieces of writing like this have made the sorrow a little more bearable. Thanks.

Michael, this seems to me a good forum to float a suggestion that there should be a tribute volume honoring David Hartwell like the one for John W. Campbell. He obviously bought some great short SF or short critical discussions of SF in his career in addition to the novels he edited. Some editor should round up the authors of such works and put them into an anthology and the introduction to those stories should consist of their memories of time spent with Dave. I suppose short chunks of some of the books he edited could be included as well. Is this idea seem worth passing on? An annual Hartwell prize for editing might also be appropriate too, although there are so many awards these days that a tribute anthology might be easier to get off the ground.

Errr, thanks for using my photo, but I would appreciate your adding, "Photo by and Copyright © Andrew I. Porter" to the post.

I will do that. My apologies, Andy.