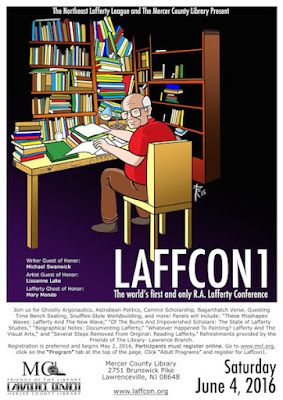 Feast of Laughter has to be one of the most extraordinary fannish feats of recent years. It's a full-length book/zine containing new and reprint essays, appreciations, letters, whatevers pertaining to the man who was easily the most original science fiction writer of the Twentieth Century -- Raphael Aloysius Lafferty.

R. A. Lafferty, "Ray" as his friends called him, was, during his lifetime, recognized as one of the giants of the field. Now, alas, he's close to forgotten.

But not quite! Some of the great man's friends and admirers have been working hard to reignite Lafferty's reputation. This volume of Feast of Laughter is the third collection of Laffertiana and it is a must for all serious Lafferty fans.

World Abounding - New Essays
Ray by Rick Norwood
One Cannot Give Too Many Instances by John Ellison
Eudaimonism in R.A. Lafferty’s Aurelia by Gregorio Montejo
Outside the Cathedral by Kevin Cheek
Copyright, Copyleft, Copyfuture by Rich Persaud
Lafferty and His Monsters - Part 1: The Early Works by Daniel Otto Jack Petersen
The Annals and Ace; or, The Textual History of an Historical Text by Andrew Ferguson

All But the Words - Translating Lafferty
From Russia with Laff: A Very Brief Report on R.A. Lafferty’s Russian Translations by Niyaz N. Abdullin

Bright Coins in a Never-Ending Stream - Reprinted Essays R. A. Lafferty: Effective Arcanum by Don Webb
A Sound of Lafferty by Roman Orszanski
R. A. Lafferty: The Function of Archetype in the Western Mystical Tradition by Dena C. Bain Taylor
Thus We Frustrate Charlemagne by Paul Kincaid
R.A. Lafferty, Sir Thomas More, and the Problems of Utopia by Robert Bee
Introduction to R.A. Lafferty’s The Fall of Rome by Darrell Schweitzer
Introduction to The Devil Is Dead by Charles Platt

Through Other Eyes - Reviews
The Man Who Made Models - Review by Stephen Case
Past Master by R. A. Lafferty by MPorcius
Utopia by Thomas More by MPorcius
R.A. Lafferty — Apocalypses (1977) by Gene McHugh

The Man With the Aura - Lafferty's own words!
Don’t Just Read Lafferty, Be Lafferty! by Anthony Ryan Rhodes
Tell It Funny, Og by R. A. Lafferty
Configuration Of The North Shore by R. A. Lafferty

... and now you know whether you need it or not.

If you do, you can buy it from Amazon here.

Or you can go to the Feast of Laughter website where, with astonishing generosity, a free pdf file of the entire book/zine is available for download here.


And speaking of Ray Lafferty...

The Feast of Laughter folks (the title applied to their website before it became attached to their publication) are throwing the world's first R. A. Lafferty convention on June 4th in Lawrenceville, New Jersey. Laffcon 1 is a one-day event because they're making this up as they go along and don't know how much demand there will be for such a thing. It may get bigger with time or it may stay the same size. We'll see.

I think it'll be a hoot. If you're in the area, why not attend?

That's the poster for Laffcon 1 up above. You'll note that I'm a guest of honor. I throw that out casually, as if it were no big deal for me. But of course it is.


And speaking of Harlan Ellison...

You may have noticed that Centipede Press has been issuing Lafferty's collected short fiction in beautiful, not-cheap hardcover editions. I wrote the introduction to volume 1, The Man Who Made Models and Harlan Ellison wrote the into to volume 2, The Man With the Aura. I particularly admired the exchange at the end, where the two writers offer their assessments of each other. If you haven't read it but will, I'm not going to spoil the essay by quoting it. But if you have read it, then you really must read the interview herein with Harlan.

Thank you!
And for those who read the comments on this blog, let me tell you that Michael Swanwick was one of our inspirations for creating Feast of Laughter. His introduction to Lafferty's Iron Tears, "Despair and the Duck Lady" warned us of the consequences of inaction and exhorted us to help preserve Lafferty's literary legacy. And so we are. Thank you, Michael!

Michael, thank you!
See you there, and hurrah for New Jersey and its enthusiasm for Lafferty!