The Godless Atheist Christmas Card of the Year! 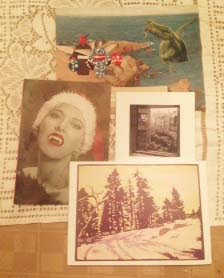 Every year at this time, the Not At All Nepotistic Blue Ribbon Panel of Family meets to examine all the Christmas cards received this season and choose the single one most completely lacking in religious feeling at the Godless Atheist Christmas Card of the Year.

And what a strange year it was! One by one, the giants fell. John and Judith Clute, always front-runners (and always highly anticipated since their cared is a work of art by Judith herself)sent a card featuring a cathedral gargoyle and were immediately disqualified for Christian imagery. The inimitable Jason Van Hollander, whose holiday greetings inevitably bring with them a sulfuric whiff of damnation, was immediately thrown out of the running because the card consisted of pictures by his wife Terry, which were undeniably heart-warming. Even my sister Mary, who is (inexplicably, since she is neither godless nor atheistic) always in the vanguard of this competition was deemed out of the running because her card bearing a cartoon of an ice-skating giraffe had a cartoon of a sprig of mistletoe on the back! Druidic imagery apparently being close enough to Christian for the Not At All Nepotistic Blue Ribbon Panel of Family.

But in the event, the judging was fierce and furious. Darrell Schweitzer's and Mattie Brahan's Star Wars cartoon card was ruled religious because the beloved Disney trademark characters were caroling. Similarly, my sister Barbie's Thing 1 and Thing 2 card was kicked out of the running because "It's Dr. Seuss!" (I did not see that as being inherently religious but was shouted down.) Our friend Charlotte's card was taken out of the running because it had kittens in Santa outfits. And so it went.

Finally, it came down to the four cards up above, each one of them breathtakingly qualified to win. Mike and Beth Zipser's image of dead trees in winter was not only beautiful but conveyed a bleakness and lack of hope perfectly antithetical to the season. Novelist Elizabeth Willey's original collage of a seagoing and fish-eating Cretaceous carnivore calmly watched over by kimono-clad hummingbirds managed to not only be an engaging word of art but also to have nothing whatsoever to do with the holiday season. Unless there's some kind of Japanese pun hidden in there, which I would not put past her. Finally, photographer Beth Gwinn's vamp vampire is so inherently anti-Christmas that even the fact that she's wearing a Santa hat didn't disqualify her.

But in the end, there can only be one winner.  And that one is... drum roll, please... bookman Henry Wessells for his spare, even minimalistic card with a black and white photo (by M. J. Duffy) of the view from Allen Ginsberg's apartment in 1988. Very briefly, it was argued that since Ginsberg was a Buddhist some slight whiff of religious feeling might yet cling to the image. But that was mere sophistry and quite rightly shouted down by the more rational members of the Blue Ribbon Not At All Nepotistic Panel of Family.


And a foodnote to literary history...

Personally, I felt that my old college chum Dan's card should have been in the running. It showed a reindeer humping a reindeer that was humping another reindeer. Breathtaking. However, it mysteriously disappeared shortly after its arrival in our house.  I know who I suspect.

Always a bridesmaid, never a bride. . .

The prior comment was me. I thought it linked to my email. Sigh.

Is Elizabeth Willey still writing? _The Well Favoured Man_, so many years after publication, remains one of my favourite novels - civilised and funny and smart, and in a nice dialogue - somewhere between homage and piss take - with Zelazny's Amber books.

I've always hoped to see more beyond _The Well Favoured Man_ and its two sequels.