The Mummers Are Dead -- Long Live the Mummers! 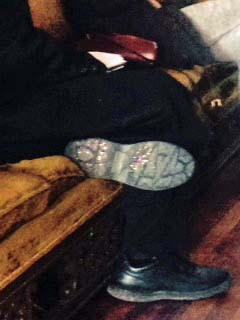 Roughly thirty years ago, William Gibson observed that William S. Burroughs was the first writer to pick up science fiction as if it were a found object -- a rusty eggbeater was the example he used -- and incorporate it into his art.

Saturday, it was my turn to be a rusty eggbeater.

Artists Leah Mackin and Alex Lukas put on an event at Space 1026, here in Philadelphia, titled The Mummers Are Dead Long Live the Mummers. It was...

Space 1026 is your quintessential artist coop workspace. Offices, equipment, and graffiti in the back, an open space for doing things in the front. A small crowd, to judge by the number of chairs exactly the number expected, showed up. Everybody kept their coats on because such spaces are only rarely heated. Interestingly enough, two of the comic clubs used the front space to make their costumes in, and there was still a certain amount of Mummer detritus strewn about. A sign by the door to the rear read: NO GLITTER PAST THIS POINT. Because, of course, there was a great deal of glitter strewn everywhere.

Before the reading, there was a showing of "Who's Having Fun," a 1980 documentary on the Mummers. Then Lukas and Macklin took turns reading quotations from newsspaper articles, contemporary blog entries, and even a certain "campy science fiction novel" -- my own In the Drift, in which Mummers rule Philadelphia. Taken as a whole, they formed a thoughtful essay on the evolution of the Mummers over the past half-century and the challenges (lack of money and lingering traces of racism, mostly) still facing them.

As an essay, it was coherent and convincing. But, taken as a whole, it was more than just an essay or a lecture. The combination of aural collage and its creators' refusal to inject their own words into the text made it something else. I guess I'd have to call it research art.

Whatever it was, it seemed to me a pretty complete success.

Afterward, Marianne and I left for a friend's party in Delaware. We talked about the event all the way from Philadelphia.

You can see the Mummers documentary on YouTube here.


Above: My shoe. Glitter. From the floor. Photo by M. C. Porter.