Writers, Podcasts, and Jailbait in a Rowboat 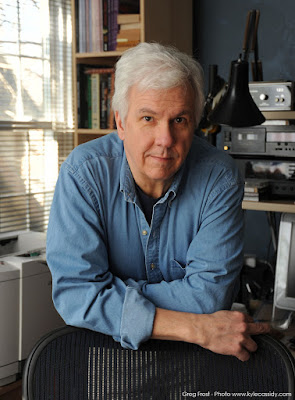 Sunday, I did a podcast with Gregory Frost for the Philadelphia Writers' Conference. We talked about a number of things of interest to writers, but chiefly about our collaborative story "Lock Up Your Chickens and Daughters -- H'ard and Andy Are Come to Town!" Which recently (ahem!) won the Asimov's Readers' Award for best novelette.

I've explained before how the characters of H'ard and Andy were inspired by Howard Waldrop and Andy Duncan -- chiefly by their speech patterns, but also by their sharp intelligence and innate decency. In the interview, I also explained where the third main character of the story came from. Just to set you up, here's her first appearance in the story:


At that moment, a slim girl with a tremendous mass of red hair and freckles to match slid into the booth alongside Andy, locked eyes with H’ard, and said, “I’m not wearing any underwear.”
“Heaven help us,” Andy said.  “What kind of a way to begin a conversation is that?  No how-dee-do, no ‘Hi, my name is –,’ no big sunny smile that declares as good as words that you hope we might all of us wind up as friends.  No, just a bald declarative sentence that combines a complete ignorance of the social niceties with a distasteful disregard for the importance of personal hygiene.  I don’t know when I’ve ever felt half so offended this early on in an acquaintanceship.”
H’ard grunted.  “Let’s start over.”  He extended a big hand across the table.  “Name’s H’ard.  My friend’s Andy.  What’s your name, sweetie?”
The girl took his hand and shook.  “It’s Jezabel.”
“Oh, it is not,” Andy said.  “Nobody’s going to believe decent Baptist folk gave their daughter any such ridiculous name as that.  I don’t believe it, H’ard here don’t believe it, and I don’t believe you’re fool enough to believe for an instant that we believe it neither.  Your real name is probably Susan or Ellie or Mildred or something sensible like that.”
The girl turned as red as her freckles.  “It’s Lolly.  And you ain’t no gentleman for forcing me to admit to it.”
“Pleasure to meet you, Lolly,” H’ard said.  “Now why don’t you tell us just what it is you’re up to, talking to two strangers on no pretense at all.  Not that I object.  But I am curious.”
“I intend to get the hell out of this nothing-happening town.”
“Ambition is admirable in a child,” Andy said.  “Only, exactly how is talking with us going to accomplish that?”
“Gonna hook up with you two.  I’ll let you pop my cherry in return.”
“What in the name of God’s little green apples are you talking about, girl?  Your lips are moving but listen hard as I might, I don’t hear a single syllable of sense coming out from between them.”
Lolly scowled.  “I don’t see what’s so difficult to understand.  Y’all got a car and I overheard my father saying that you’re obviously criminals of some sort or other.  We can come to terms.  I’ve got a few heavy petting sessions under my belt and I’m ready to move on to unfettered moral depravity.”
“Heaven help us,” Andy moaned.  “Could this situation get any worse?”
H’ard, who had been listening intensely, said, “Tell me something, little darlin’.  What exactly does your daddy do for a living?”
“He’s the sheriff.”
“Heaven help us!”

The original for Lolly was a girl somewhere between fourteen and sixteen years old who lived near Williamsburg, Virginia, where I went to college. She had discovered sex and had a thing for older -- but not too much older -- men. Which is to say college students. She was not shy about expressing her ambitions. And, yes, her father really was a sheriff.

One summer, a friend of mine was working props for The Common Glory, and open-air theatrical for tourists, which involved him sitting quietly in a rowboat on Lake Matoaka for over an hour before towing a fake warship into view. One evening, a girl's face popped up out of the water and she said, "Hi. Can I come on board?"

My friend, who at that time was madly in love with a woman who would not have him and thus not even remotely interested in anyone, else said sure, and into the boat she surged -- totally naked, obviously jailbait, and ready for action.

All my male friends at that time were long-haired libertines and it would have made a duck laugh to see the terror she caused among them. The women I knew were certainly amused.


If you're curious about the Philadelphia Writers' Conference, you can find their website here. I'll let you know when the podcast goes live.


Above: Gregory Frost. Photograph by Kyle Cassidy, portraitist of greatness.