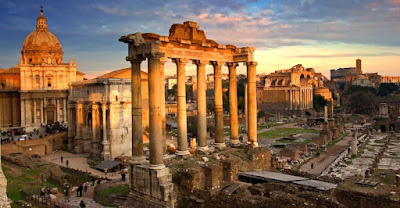 I was recently asked what I would do if I could spend an entire week doing anything but work. I replied, "Sit in a dark room and write."

Writing is not only my avocation, but also my hobby (that's where the monographs on Hope Mirrlees and James Branch Cabell came from) and my recreation.

So today, when I should have been working on the novel but just couldn't face the drudgery, I declared a mental health day, booted up an old story that had hung up on a point of plot years ago, and started to play with it.

I think I've got the problem solved. But that doesn't really matter. Everybody needs a day off now and again.

The story is called "Starlight Express." Here's how it begins...

Flaminio the water carrier lived in the oldest part of the ancient city of Roma among the popolo minuto, the clerks and artisans and laborers and such who could afford no better.  His apartment overlooked the piazza dell’Astrovia, which daytimes was choked with tourists from four planets who came to admire the ruins and revenants of empire.  They coursed through the ancient transmission station, its stone floor thrumming gently underfoot, the magma tap still powering the energy road, even though the stars had shifted in their positions centuries ago and anyone stepping into the projector would be translated into a complex wave front of neutrinos and shot away from the Earth to fall between the stars forever.
Human beings had built such things once. Now they didn’t even know how to turn it off.
On hot nights, Flaminio slept on a pallet on the roof. Sometimes, staring up at the sparkling line of ionization that the energy road sketched through the atmosphere, he followed it in his imagination past Earth's three moons and out to the stars.  He could feel its pull at such times, the sweet yearning tug that led suicides to converge upon it in darkness, furtive shadows slipping silently up the faintly glowing steps like lovers to a tryst.
Flaminio wished then that he had been born long ago when it was possible to ride the starlight express away from the weary old Republic to impossibly distant worlds nestled deep in the galaxy. But in the millennia since civilization had fallen, countless people had ridden the Astrovia off the planet, and not one had ever returned.

Except, maybe, the woman in white.

And for the rest, you'll have to wait for the story to be finished and then published. Late this year or early next, I'm guessing.

Though I'm really not in a hurry.


Above: This image comes from History.com, the website for the History Channel. A fun place to wander through. Give it a try.