Lock Up Your Chickens and Readers . . . 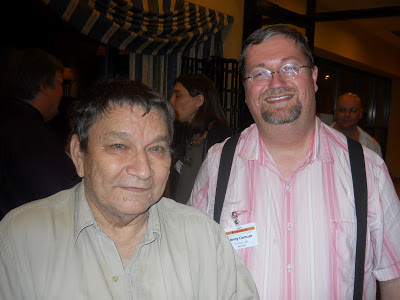 The 2016 Asimov's Readers Awards were given out Sunday at a breakfast awards ceremony during SFWA Nebula Conference in Chicago. And the award for Best Novelette went to...

"Lock Up Your Chickens and Daughters -- H'ard and Andy Are Come to Town!" by Gregory Frost and (ahem!) me.

One pleasant aspect of writing a collaborative story is that if it wins an award, you only have to be half as modest as if a solo work wins. So I can tell you that I am extremely happy with this honor because I love this story. Greg and I were in complete accord as to what this kind of thing should be like and together we crafted something that suited our shared vision completely.

The story is set in a fantasy version of the dust bowl and features two con men loosely based on Howard Waldrop and Andy Duncan. That's them above. I took that shot and for a month kept showing it to people, saying, "Don't they look like two old-time grifters?" Until finally I realized that my subconscious was trying to tell me there was a story to be written.

To give you an idea of what the story's like, here's a bit of dialogue that comes right after the local sheriff tells our two heroes that he's going to telegraph the State to see if they're wanted for anything. Greg wrote Andy's lines and I wrote H'ard's:

“Well, I don’t mean to be negative, sir, but I’ve got to tell you:  I just simply do not believe in the telegraph, and that’s a fact.  New-fangled nonsense device like that is prone to breaking down exactly when you need it most.  Why, wires get broke and then all the electricity goes astray and flies helter-skelter all over the place, frightening horses and inconveniencing honest citizens.  Fella writes down a two-dollar message and a puff of wind blows the paper right out the window.  In all the confusion nobody even remembers who sent the darn thing or what it said.  No, sir, put not your trust in machines.  One man, one mule, and a leather sack of paper envelopes with a magenta two-cent George Washington stamp and a hand-cancelation on the front does the job best, is what I say.  Takes a little longer but a dozen times more sure.”
“If you want our particulars,” H’ard said, “just ask.”


Now, either you like that or you don't and I like the entire story quite a bit. But for my money, that riff that Greg came up with is just the best part of the whole damn thing and no amount of reasoning on your part is going to shift me on that.

So thank you, Greg. It was a pleasure working with you.


And we're not the only ones happy today...

There are also those who won the Nebulas. It was a good slate and a good set of winners, both. And there are also our fellow Asimov's Readers' Award winners and our cousin Analog Analytic Laboratory winners. As follow:

Posted by Michael Swanwick at 2:17 PM

Pass on to Greg that he has captured Andy better'n one of those instant-picture cameras you can't get film for any more. (I'm not familiar with H'ard's real voice, but I admire the beat and contrast of his line and have faith that he is similarly well-depicted.)

You two fellas is allowed to smile in satisfaction at each other, I reckon.

From the sound of this: https://xenforo.com/community/threads/missing-images-with-webkit-fake-url-in-the-url.34752/ you might have tried to paste an image straight into blogger, rather than uploading it using their tools.

Picture updated. Blogger was giving me a lot of trouble on Monday.