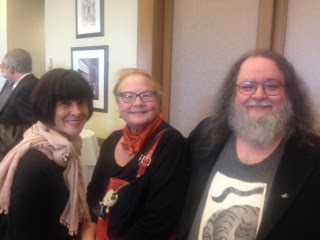 A little less than two weeks ago, there was a memorial for David Hartwell at Columbia University in NYC. David was a serious mover and shaker in the world of science fiction, both as an editor and as a fan. A lot of people were pretty shaken when he was suddenly taken from us. So the gathering was a pretty heady combination of editors, agents, writers, big-name fans, bookmen, and the like. Even David's boss, Tom Doherty, was there to talk about his old friend.

Rcently, I was at a book launch where a young writer there, told me that the rumor was that industry reps saw the memorial as the networking opportunity of the season.

That's not how it felt on the ground.

Partly, it was that the event was organized by Jennifer Gunnels (seen above, left, next to Marianne), Claire Eddiy, Melissa Singer, and Robert Davis and they made sure that only people who belonged there were invited. I told my agent, Martha Millard, that this was the third memorial for David I'd attended, and she said, "Maybe after a few more, we'll begin to believe that he's gone." Nobody there was in a networking mood.

I did not speak, though I would have had I been needed. But I knew there would be many, many who wanted to lay a last wreath of words at David's feet, and in this I was right. The tributes did go on for quite a bit.

Still, there was one thing that was said by several of the speakers and also privately, both before and after the formal part of the memorial. "We are a family." It was said over and over. "We are all family."

Looking around at that gathering, I could see that it was true. It was mot juste for this gathering. These were all people I cared about, all people who mattered to me and to each other.

We don't often say this aloud. Ours is not an age that celebrates sentiment. But there it is. Amid all our moving and shaking, money-seeking and literary ambition, we have created something that requires a warmer, closer, more personal word than community.


Above, l-r: Jennifer Gunnels, Marianne Porter, Kevin J. Maroney. A lot of speakers got applause. Only Kevin got spontaneous laughter. He also paraphrased John 21, verse 25, which I thought was magnificently cheeky of him.

Dougherty is a typo, I trust.