Yet Another Reason Why Michael Dirda is America's Favorite Critic 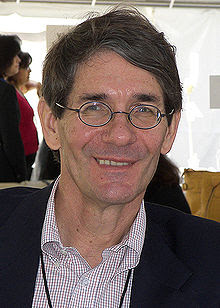 A few weeks ago, I had the honor of introducing Michael Dirda when he spoke at the Nebula Awards banquet.  That has no particular relevance to this post.  I'm just boasting.

Dirda is technically, I suppose, a critic.  I personally think of him as someone who reads a lot of books, thinks about them very carefully, and then shares what he's learned with the rest of us.  Which is to say, he's a very valuable individual indeed.

Now, over at Bookforum, Dirda has written an essay explaining why the Best Seller List is a disaster for people who love to read books.  Here's an excerpt:

The best books of a genre seldom make the list. The finest all-around American crime writer of the past forty years—I speak of Donald E. Westlake—never matched the sales of Elmore Leonard, let alone Patterson. Reviewers praised his comic Dortmunder capers, readers ecstasized over his lean Richard Stark noirs. A novel like The Ax—as brilliant a black comedy as the film Kind Hearts and Coronets—should be famous. These days, people will line up for hours to get their Neil Gaiman books signed, but whom does Gaiman admire among living authors? Gene Wolfe. You’ve never heard of Wolfe, right? (Try the majestic multivolume Book of the New Sun.) Go to this year’s World Fantasy Convention, ask its attendees to name the greatest contemporary work in their genre, and the answer will likely be Little, Big by John Crowley. You could have read this instead of the latest installment of Twilight.

You can read the entire essay here.

I'll be there, of course, and flogging the heck out of my brilliantly entertaining Dancing With Bears.  But, more remarkably, Billee Stallings will be there!  Yes.  You'd be very excited about this if only you knew who Stallings is.  So I'll tell you.

Billee Stallings is one of Will F. Jenkins's four daughters and, along with her sister, Jo-an Evans, has written a memoir of the great man.  You may better remember him under his pseudonym of Murray Leinster, one of the founding fathers of modern science fiction and the man who, long  before Asimov or Heinlein or Clarke, was known as "the Dean of Science Fiction."

Alas, Murray Leinster: His Life and Times will be published just a week or so too late for you to get her autograph.  But you'll get to meet the daughter of Murray Leinster!  She's not planning to go to any more science fiction conventions ever, which means this is your best and only chance to meet her.

Plus she's a very likable lady.

I met Billee's father once, almost forty years ago, and I've never forgotten the experience.  He was an amazing guy.  If you're going to be at Readercon, you'll want to chat with her about her father.  Luckily, she'll be happy to chat with you.

Above:  Michael Dirda.  I hardly ever run into him.  But I always enjoy our conversations when I do.

This reminds me that I need to read _Little, Big_ again, after 20 years or so. I discovered it in a used bookstore when I was 15 or 16, and had no idea what it was (except that it was a fantasy novel). I think I picked it up because of the trip-a-riffic cover art or something. It was kind of tough falling in love with this kind of book, but then having no one that I could talk to about it.

That was probably the first piece of respectable adult fantasy that I read, except maybe for LoTR (which in my mind is more like young adult fantasy).

Little, Big had that quality of unpredictability that all the best literature has. EVERYTHING that happened came as a surprise.

Little, Big is brilliant. I need to read that again soon, it's one of those books I take up every few years. Along with Moby Dick, well known but insufficiently appreciated.

And then there's Mark Helprin's A Winter's Tale, another undeservedly unknown book, IMNSHO. Gotta dig up my copy of that again, too.--Mario