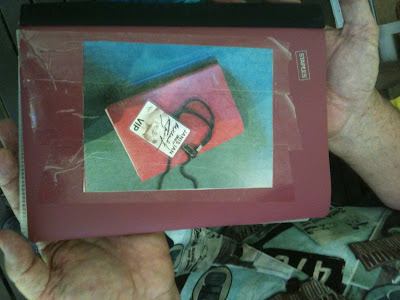 A few weeks ago, I went to a Janis Ian concert and, while there, lay my VIP pass down on my notebook and took a snapshot of it.  I may have posted that photo here.

Then I printed the photo and taped it to the front of that same notebook.

A while later, I ran into Henry Wessells and showed him the notebook.  He, being fascinated by examples of recursion, took the above snapshot, which he then emailed to me.

I printed out the photo and taped it to the inside back cover of the notebook.

Last weekend, I ran into Henry again, and showed him the inside back cover.  Immediately, he whipped out his camera and took a photo.

This may never end.


And if you're going to be in Philadelphia tomorrow . . .

I'll be doing a reading for Philadelphia Fantastic at Moonstone Art Center, this Friday, July 22, starting at 7:30 p.m.

Moonstone is conveniently located in Center City Philadelphia at the corner of 13th and Sansom Streets. (That's 110 S. 13th Street, for those of you reliant on GPS.)  Copies of Dancing With Bears will be available for sale, and I'll be handing out signed-and-numbered limited edition chapbooks of the Darger & Surplus flash fiction The Nature of Mirrors to anyone who'd like one.  Both the chapbooks and the event are free.


But if you're going to be at Confluence this weekend . . .

I'll be in attendance Saturday and Sunday, and I should still have a few of the chapbooks to give away.  All you need do is ask.

Above:  Photo by Henry Wessells.

This is a more literary version of the infinite cat project: