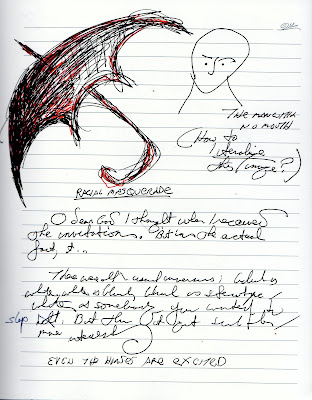 This is what a writer's notebook page ought to look like!  First, two doodles, one labeled The man with no mouth, annotated (How to literalize this image?)  Which is a tough question when you're a fantasist.

O dear God, I thought when I received the invitation.  But in the actual fact, it...

There were all the usual inversions:  Black is white, white is black, black as stereotype and white as somebody you wanted to slap.  But then it got subtler and more interesting.

I'm pretty sure somebody will do this at some point, when it finally begins to look like we're putting racism behind us.  And I'm absolutely certain it will be a bad idea.  When I was in college and Fifties nostalgia was brand-new, I went to a sock hop.  It seemed like it would be fun and harmless.  Only a couple of students went as hoods.  They faked a rumble and it took about thirty seconds to turn serious.  We had to drag the combatants apart.  "I'm going to kill him!  I'm going to kill him!" one kept shouting, red with rage.

We are whatever we pretend to be.

There's a profound story to be written about a racially-themed costume party.  But I didn't feel the holy fire you'd have to have to do it up right.  So I dropped the idea like the opportunity to accidentally say something really stupid that it was.