Winter Is Coming -- and Readercon Too! 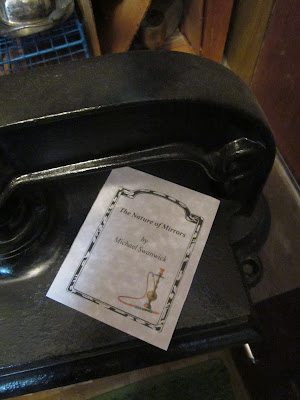 I'll be at Readercon the weekend after next.  Which means I'll be handing out free signed-and-numbered limited edition chapbooks!

Those who have been reading this blog for a while know that, as a promotional item for Dancing With Bears, Marianne's nano-imprint Dragonstairs Press created a set of four matched chapbooks, each one containing one short-short originally published as a part of "Smoke and Mirrors:  Four Scenes from the Postutopian Future."  I handed out most of the copies of the first three chapbooks at the last three conventions I attended and, rather to my surprise, so far as I can tell not a one of them has hit eBay yet.

So these suckers are going to be collectable.

All you have to do is come up to me at Readercon and ask.