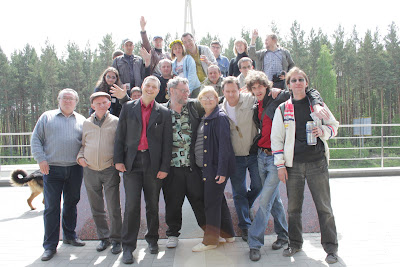 My friend Igor Iva sent me some photographs taken during and after Aelita, the Russian science fiction convention in Ekaterinurg.  Here's one of them.  It was taken at the border of Europe and Asia during the picnic after the con.  Not everyone was there, of course.  It was a picnic and nobody was giving or obeying orders.  But that's a good selection.

You'll note that I'm carefully standing on both sides of the border, straddling the continents.

Above:  I can identify most of the people in the photograph, but not all.  So, rather than offend some of them, I'll be silent on the subject.