A Novel Waiting to be Written 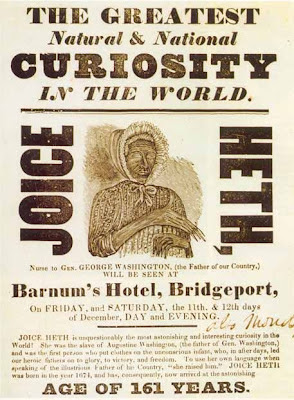 As part of my ongoing research into the thoughts and craft of Darger & Surplus, I've been reading a biography of P.T. Barnum.  One of his early triumphs was the display of Joice Heth, a woman reputed by be 161 years old -- and the baby George Washington's nurse.  She certainly looked the part.  She was blind and largely paralyzed and wrinkled with age.  But she was also an engaging conversationalist.  She would tell tales about little George and sing a hymn.  A gullible public ate it up.

And how did P.T. Barnum find her?  He bought her from another showman.  Ms Heth was a slave.

In later years, Barnum was ashamed of the incident -- not because he came to realize that owning a human being was wrong, but because when Joice Heth died, an autopsy revealed that she was in her seventies.

I think this story has got all the elements for a big novel:  The world's greatest showman (and the first man to realize that the power of the media could be manipulated for commercial gain), the father of our country, and the greatest shame of American history, all wrapped up in one big package of fraud and humbuggery.

Plus, there's the personality of Ms Heth.  Who, despite crippling infirmities, apparently lied her way into a comfortable gig where she was the center of attention.  All accounts say that she had an engaging personality.  Wouldn't you love to hear her side of the story?

All of this could be made serious art in the hands of somebody who has an ax to grind or a message to relate about racism or America or humbug or whatever.  Me, I don't -- nothing, anyway, suited to this particular story.  But surely there's somebody out there who does.

I've got admit, I find it hard to believe that Barnum didn't know the truth about her. Or at the very least, that he felt ashamed about falsely representing her age. He made money off of plenty of other ridiculous gags that he knew the truth about, didn't he?

Of course, the idea that Barnum of all people was swindled by an invalid member of America's most powerless class is so delicious on so many levels that we can't help but want to believe it. A sucker born every minute, indeed.