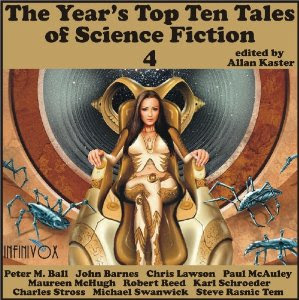 Audiobooks are certainly coming up in the world.  (A good thing, too, with all the traveling I do!)  My stories appear in four anthologies on Audible.com.  They are:

and, just the other day, The Year's Top Ten Tales of Science Fiction 4, edited by Allan Kaster.  which contains "For I Have Lain Me Down on the Stone of Loneliness and I'll Not Be Back Again," my tale of love and terrorism set a century in the future.

Six of my novels are also available as downloads -- and this is why I haven't mentioned them before; because normally I blog about my fiction when I receive the contributor's copies -- on Audible.  They are:

Bones of the Earth
Stations of the Tide
Jack Faust
The Iron Dragon's Daughter
The Dragons of Babel
Dancing With Bears.

As for the job the readers have done . . . I honestly can't tell you.  It turns out that I cannot listen to other people reading my work because they put the emphasis on other words than those I would.  You wouldn't think it would be that big a deal, but it is.

Other people's novels, however, I have no problem with.

You can read about Kaster's audio anthology here.

I bought the first volume of the new League of Extraordinary Gentlemen series and am happy to report that it's nowhere near as gnostic as the 1969 version was.  It struck me, however, that Alan Moore was at a disadvantage dealing with the year 1997 because for legal reasons he had to stay with immortal characters from out-of-copyright fiction (Orlando, Allan Quatermain) and unnamed or renamed characters we're supposed to decode and who have minor roles (Emma Peel, James Bond).

So I began in my imagination to put together a new team of EG, for an adventure that could be written a century from now.  Emma Peel makes an excellent M and I'd keep her.  I think that Buffy and  Hannibal Lector both deserve a place on the roster.

But who else?  Ideas, anyone?


Posted by Michael Swanwick at 7:31 AM

Unfortunately, Philip Jose Farmer beat you to it with Richard Burton. My own suggestion would be Blucher, the Prussian General who saved the day at Waterloo despite most of creation conspiring to stop him. He was a man of extraordinary toughness and tenacity, one of my heroes. If you don't know the story of his experiences in the previous 24 hours, it's here: http://en.wikipedia.org/wiki/Gebhard_Leberecht_von_Bl%C3%BCcher#Hundred_Days_and_later_life

Yeah, current prose fiction: Jack Ryan would be too high profile as -- what is he in the latest book -- World Emperor? Lestat? Tyler Durbin? Tom Ripley? Repairman Jack? Lizbeth Salander? Zen Master Seymour Glass? The chick with the thumbs from "Even Cowboys Get The Blues"? I'm having a difficult time remembering any larger than life characters in contemporary fiction.

Lizbeth Salander seems like a good pick even though I haven't read those myself.

I like all the others too. Though Seymour Glass would just be comic relief for intellectuals.

Chick, the telekinetic baby from Katherine Dunn's "Geek Love" would be a good choice, I think -- someone Moore would have used if he could (assuming he's read the book.)

The 22nd-century pastichist would probably want some nod to the Stephen King oeuvre-- I think probably Carrie White, although Charlie McGee from Firestarter or Danny Torrance from The Shining or Johnny Smith from The Dead Zone are all possibilities. So many psychic kids! The latter two especially are rather close to Cole Sear so one probably wouldn't want both.

Fox Mulder might be given the task of assembling the team.

Relative to previous incarnations of the League, it's amusing to think how easily this generation of the League could be filled to overflowing with:
(a) female detective/agent types;
(b) psychic kids;
(c) vampires;
(d) serial killers.

Maybe Mulder and Dale Cooper could be working together. Except we don't really know how Dale Cooper faring since Twin Peaks ended on a cliffhanger...

I'm a bit out of touch, but I can't help suspecting that somewhere out there is a character who falls into all four of those categories.

Or three at the very least.

Dare I say Hermione Granger as a magical detective, or is that too blatant? I also second characters from King.

I'd go with Trinity from the Matrix. Great hang-time. Paris Hilton and Kim K. who come to an egregious end early in the series (killed off by the lead villain which lends the role sympathy). Lady Gaga and Snoop Dogg as decrepit and forgotten has-beens who just may save the day. Maxwell Smart as the team leader.

I'd sort of like to see astronaut, and twentieth-century Aladdin, Major Tony Nelson.

I could see setting Paris Hilton up as the Human Thinking Machine of the crew. And then killing her off almost immediately, of course.

Lestat or John McClane from the Diehard movies. I could see Lestat and McClane falling in love.