A Vision of the Goddess 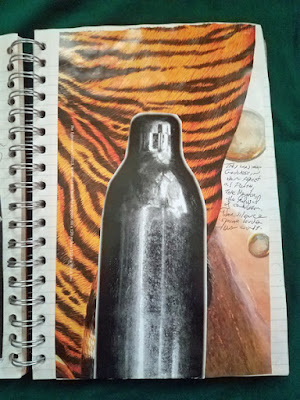 There she is--the Goddess Herself. Just as Helen saw her in yesterday's post. Direct sightings of the Divinity are rare and dangerous. When Moses saw God on Mount Sinai, it left a physical mark on him. (In the Middle Ages, it was thought the mark took the form of horns. Which is why Michelangelo's Moses has two sharp nubbins poking out of his hair.)

The Goddess is taken very seriously indeed in this book. Even if the idol of her is obviously a pressurized gas canister.

This was the Goddess in her aspect as Death, the Negator, the refusal of consolation. Her silence spoke loouder than words.

Death, too, is taken very seriously in this novel.

Neither the above text nor yesterday's made it into The Iron Dragon's Mother. But they were a crucial part of the ideation, I think.

Above: For those who came in late, my latest novel, The Iron Dragon's Mother, will be published in 38 days. To draw attention to this fact, I'm serializing the Image Book I made to help me imagine a strange world for the book.
*
Posted by Michael Swanwick at 4:22 PM