The Bureaucrat Has Left The Planet 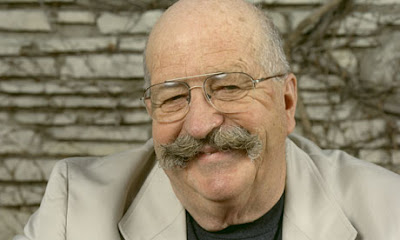 Be patient with my title. All will be explained.

Gene Wolfe was a combat vet, a true and faithful husband, a practicing Catholic, and an accomplished engineer. He was also the author of The Book of the New Sun, the single greatest accomplishment of science fiction to date, and stories like "The Eyeflash Miracles," "Alien Stones," and "The Hero as Werwolf." Short fiction is not given its due these days but these and other stories by Wolfe will be read a hundred, a thousand years from now. I am not exaggerating here. He was one of our best.

But you want insight into his character. Well, okay. The first convention where I ever got to spend any serious time with the man, he and I and my wife, Marianne Porter, were sitting at a table and he started to tell us about a library book sale he'd been to the previous weekend. He was excited because he'd gotten several shopping bags of old books for two dollars each. Then he said, "Looking through them, books published a hundred year ago, so many had inscriptions like 'To Amelia from her loving Aunt Mame.' You look at them, so many inscriptions, and all these people are... are... they're all dead!"

And he almost burst into tears.

Afterward, Marianne said to me (keep in mind here that she immediately fell in love with him), "That is the most emotional man I ever met."

He was, and I don't think that was unrelated to his genius.

The first time I ever met Gene was long before, in the late seventies when he was working as an engineer but had already written  some of his most brilliant work, and I was struck by how astonishingly ordinary he looked. He was one of the most ordinary-looking men I had ever met. Later, upon retirement, he grew that wonderfully eccentric Gene Wolfe mustache and achieved an eccentricity befitting the man he was. But back then, in the Midtown Diner with Gardner Dozois and Susan Casper (I was definitely bottom man on the totem pole) he looked like the Continental Op--a man who would disappear into a crowd if you looked away from him for an instant.

Much later, I set out to write Stations of the Tide.

The protagonist of the novel was never named. Throughout, he was referred to as the Bureaucrat. It was important to the story that he be underestimated for most of the book and only revealed as extraordinary at the end. So when I created him, I thought of him being Gene Wolfe. On the outside, he was extraordinarily ordinary. But inside, he was... Gene Wolfe!

Not to discourage you from reading my novel but at the end the Bureaucrat wins. Of course he does. Inside, he's Gene Wolfe.

Vaya con dios, Gene. If God is just, you and Rosemary are together again. 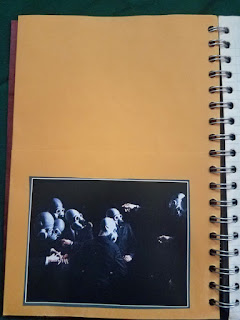 Above: For those who came in late, my latest novel, The Iron Dragon's Mother, will be published in 69 days. To draw attention to this fact, I'm serializing the Image Book I made to help me imagine a strange world for the book.


Posted by Michael Swanwick at 5:37 AM

The greatest of us all, he was.

I learnt that he had died a couple of hours after I had learnt that Notre Dame had burnt down. The whole world could watch Notre Dame's spire fall, but Gene Wolfe's death was the fall of an invisible cathedral.

"That you and I ... if we are recalled at all, will eventually be thought of as contemporaries of Xenophon and Mark Twain. That this is a small world at the edge of its galaxy, tumbling through the night, a provincial and rural backwater."

Gene Wolfe, decades ago. This was part of a contributor's note he tossed off for an anthology (probably Damon Knight's ORBIT) where he placed one of his early great stories (probably "Alien Stones"). I happened to copy it out because it struck me so.

"And as if by magic -- and it may have been magic, for I believe America is the land of magic, and that we, we now past Americans, were once the magical people of it, waiting now to stand to some unguessable generation of the future as the nameless pre-Mycenaean tribes did to the Greeks, ready, at a word, each of us now, to flit piping through groves ungrown, our women ready to haunt as lamias the rose-red ruins of Chicago and Indianapolis when they are little more than earthen mounds, when the heads of the trees are higher than the hundred-and-twenty-fifth floor -- it seemed to me that I found myself in bed again, the old house swaying in silence as though it were moored to the universe by only the thread of smoke from the stove.

"The past stood at my shoulder, naked and defenseless as all dead things, as though it were time itself that had been laid open by the fall of the mountain. Fossil bones protruded from the surface in places, the bones of mighty animals and of men. The forest had set its own dead there as well, stumps and limbs that time had turned to stone, so that I wondered as I descended, if it might not be that Urth is not, as we assume, older than her daughters the trees, and imagined them growing in the emptiness before the face of the sun, tree clinging to tree with tangled roots and interlacing twigs until at last their accumulation became our Urth, and they only the nap of her garment.

"Deeper than these lay the buildings and mechanisms of humanity. (And it may be that those of other races lay there as well, for several of the stories in the brown book I carried seemed to imply that colonies once existed here of those beings whom we call the cacogens, though they are in fact of myriad races, each as distinct as our own.) I saw metals there that were green and blue in the same sense that copper is said to be red or silver white, colored metals so curiously wrought that I could not be certain whether their shapes had been intended as works of art or as parts for strange machines, and it may be indeed that among some of those unfathomable peoples there is no distinction.

"At one point, only slightly less than halfway down, the line of the fault had coincided with the tiled wall of some great building, so that the windy path I trod slashed across it. What the design was those tiles traced, I never knew; as I descended the cliff I was too near to see it, and when I reached the base at last it was too high for me to discern, lost in the shifting mists of the falling river. Yet as I walked, I saw it as an insect may be said to see the face in a portrait over whose surface it creeps. The tiles were of many shapes, though they fit together so closely, and at first I thought them representations of birds, lizards, fish and suchlike creatures, all interlocked in the grip of life. Now I feel that this was not so, that they were instead the shapes of a geometry I failed to comprehend, diagrams so complex that the living forms seemed to appear in them as the forms of actual animals appear from the intricate geometries of complex molecules."

- THE CLAW OF THE CONCILIATOR by Gene Wolfe

Echoing Hanna's Dad's comment above: After learning of Gene Wolfe's death, I was thinking about the stunning passage in one of the New Sun books where Severian sees the cathedral flying and it turns out to be a burning tent. When I then heard about Notre Dame, it seemed almost too much of a coincidence but I realized that Wolfe had given us so many striking passages that almost any even would call to mind something brilliant from his work.

Thank you for sharing this.