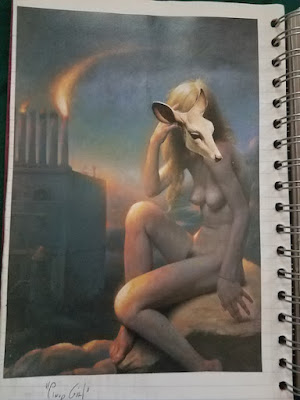 The trouble with looking for images of women in art magazines is that most of them are made by men, so they tend to be sexy and/or glamorous, rather than profoundly disturbing. So I pasted an animal head over the picture, changing it rather a lot.

And why, you ask, was I specifically looking for images of women? I was thinking about the fact in the fiction, I grew up reading, both genre and mainstream, the default gender was male. If there was a reason for a character to be female she was. Otherwise, the stained glass artisan, doctor, chemist, or baker was male. This resulted in fictional worlds where, inexplicably, there were many times more men than women.

So I decided to reverse that and see what happened. I determined to make the default gender female.

It was an interesting experiment, but since we're still in the pre-verbal stages of The Iron Dragon's Mother, I'll discuss what came of that at some later date.


Above: For those who came in late, my latest novel, The Iron Dragon's Mother, will be published in 61days. To draw attention to this fact, I'm serializing the Image Book I made to help me imagine a strange world for the book.