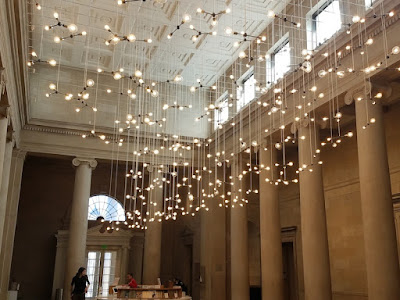 Over on Facebook, there's a game I like to play which I call Art or N'art? When I'm at an art museum I'll take a photo of something that might be art... or maybe not. Then I post the photo and challenge whoever cares to state whether it's art or not. Sometimes,the bucket with odd items in it placed in a corner is N'art--cleaning supplies nobody has cleared away. Sometimes it's very challenging Art.

It's easier for me than for everybody else because I get to see if there's a label on the wall identifying the item as art. But it's fun for everyone because nobody gets mocked for being wrong. The point is that sometimes there's a thin line between art and the merely odd.

Up above is the most challenge I put to the Facebookers. Art? Or merely a classy lighting fixture?

Not to keep you in suspense, this is Spencer Finch's Moon Dust which is currently in the Baltimore Museum of Art.

The installation is based on the dust brought back on Apollo 17, the last voyage to the Moon. Which turned out to be chiefly silicon dioxide gas, iron, calcium, and magnesium. Finch translated this into bulbs of four sizes indicating the relative weights of the elements. They combine into molecules, and the whole is represented in three dimensions.

There's a great deal more could be said about the work. But I'll skip straight to my point...

This was a particularly difficult Art or N'art because the art served as a functional light source.  We (in the specialized sense of "most of us who care about art in the present moment") tend to think that art is not functional. If it hangs on the wall of a museum, it's art. If you can use it to clip your toenails or unclog a toilet, it's not.

But sometimes something is functional and art at the same time.

Posted by Michael Swanwick at 8:35 AM