Boskone Without Its Blizzard 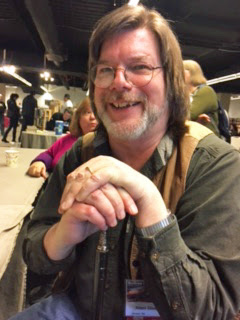 Two weeks ago, I went to Boskone, a convention known both for being a pleasant experience and for taking place smack-dab in the middle of the blizzard season. This year, inexplicably, it did not snow.

I hardly knew what to do with myself.

Mostly, I talked: With Greer Gilman, with Jane Yolen, with Bruce Coville, with Ken MacLeod, with Ellen Asher, with Charles Stross, with Daniel Dern and Walter Jon Williams and Teresa Nielsen Hayden, with Jo Clayton (a little -- far too little -- bit), with Neil Clarke, with .... Oh, trust me, a lot of cool people were there. Including, of course, Allen Steele. That's him up above, channeling his inner wizard.

I had a couple of good panels, one I felt lucky to be able to walk away from alive, and on Sunday afternoon an extraordinary one. How Stories End was supposed to be a four-person panel but two of the panelists didn't show. Leaving just Greer Gilman and me to thrash through an hour's worth of panel with only a half-hour's worth of material at our fingertips. Children, this is a recipe for disaster.

Not quite as brilliant as the year Greer and I had a two-writer conversation on fantasy titled Moonwise of Babel, which wound up later being published in Foundation. But brilliant enough to stave off disaster.

That's Greer below, at her reading. She's quite a wonderful writer and you should be reading everything of hers you can find. 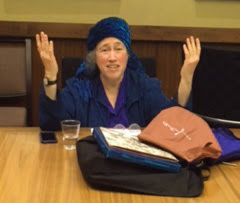 Above: My apologies to everyone who didn't get included in my list of friends I saw. Some were omitted by oversight, most of the rest by laziness, and several simply because I wanted to establish that not everybody I omitted was beyond my remembering.You don't know who you are -- and that's the way it ought to be.


Posted by Michael Swanwick at 7:55 AM