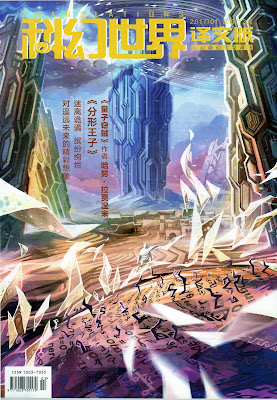 Another great day for people who happen to be me! I've received contributor's copies of Science Fiction World Translations with the Chinese translation of my story, "Starlight Express."

Don't remember that particular story? Well, I'm not surprised. It hasn't been published in English yet. As a gesture of thanks to the Russian science fiction community, I gave Ysli, the quite wonderful Russian science fiction magazine first crack at it. Quite some time later, when a Science Fiction World editor asked if I had anything new, I sent them a copy. At the time, my story was scheduled for the Winter issue of Ysli, so I figured the Russian version would easily be first.

As maybe it was. Package mail between Russia and the US can be extremely slow -- a holdover, I suspect, of Cold War policies on the part of both nations to make the other look bad.

The English language version will be published soon. I'll let you know when it that happens.

And just so you know what they're reading in China these days, here's the opening of the story:

Flaminio the water carrier lived in the oldest part of the ancient city of Roma among the popolo minuto, the clerks and artisans and laborers and such who could afford no better. His apartment overlooked the piazza dell’Astrovia, which daytimes was choked with tourists from four planets who came to admire the ruins and revenants of empire. They coursed through the ancient transmission station, its stone floor thrumming gently underfoot, the magma tap still powering the energy road, even though the stars had shifted in their positions centuries ago and anyone stepping into the projector would be translated into a complex wave front of neutrinos and shot away from the Earth to fall between the stars forever.

Human beings had built such things once. Now they didn’t even know how to turn it off.

So. Rome, Moscow, Chengdu, and (where I am now) Philadelphia. It really is a global world these days.

I actually do recall this story - or at least its opening paragraphs - from this very blog sometime last year.

You were quite taunting about it at the time as well. You're consistent Swanwick!