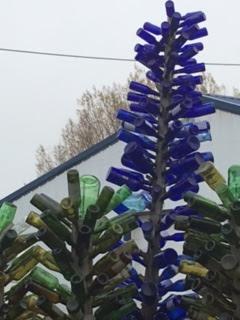 I spent the day wandering about marshlands, doing research for The Iron Dragon's Mother. Lots of nifty stuff: wild ponies seen from a distance, a gannet seen from three feet away and so on. But, necessary though all this was, none of it was geeky.

So today's blog is about a chance sighting of a cluster of bottle trees as Marianne and I passed through Stockton, Maryland yesterday.

A bottle tree is simply a dead tree whose branches have been cut short and then adorned with a glass bottle. Scholars have traced the practice back to Africa, where the practice had a religious significance. It survived American slavery and, although for a time looked to be on its way to extinction. Instead, it spread through the South to such a degree that a certain number of whites make them too.

I look for stuff like this everywhere I go. I like to think of it as Evidence of Intelligent Life on Earth.

You can read a Smithsonian article about bottle trees here. 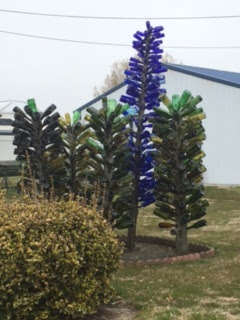