"A Week Without Magic" 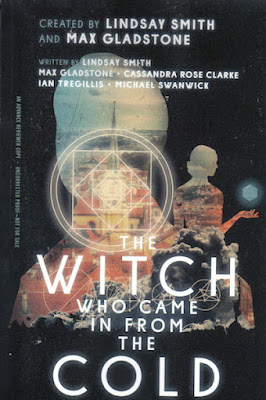 My contributor's ARCs (Advance Reading Copies -- early, usually less well made copies of an upcoming book, used for various promotional purposes, including sending to reviewers and placating authors) of Season One of The Witch Who Came in From the Cold have arrived.

The Cold Witch Project, as it's been informally called, is a work of serial fiction modeled after television serials.  In this case, it's a series set during the Cold War, in which all the players are not only aligned with either the United States or the Soviet Union but also with two warring occult powers, one of them equivocally Evil and the other only ambiguously on the side of Good with members of the KGB and the CIA on both sides of the fight. A wilderness of mirrors, basically, and full to the brim with twisty turns of plot.

Serial Box, the publisher, makes each episode available as individual e-publications. But the idea is to subscribe to the series and receive regular fictional updates on the doings of characters you've come to know and care about.

Mostly, the episodes are written by a small cadre of writers who work well together, but once per season a guest writer is invited to play in their sandbox.

Which is how I came to write Episode 6: A Week Without Magic.

It was a fun project to be involved with. I was very pleased to learn that I could work within the group's constraints and to their deadlines. And I was happy with how it all came out. Though I did have to throw a character and a subplot for which there was simply not enough room. But I did get to plant a bit of foreshadowing near the beginning of the episode and see it flower -- so to speak -- at the end. Which was immensely satisfying.

And now the first season is slated to be published by Saga Press (an imprint of Simon &Schuster) in non-ebook format. What we Old Hands persist in referring to as "real books." Which must mean that it's doing pretty well.

As well it should. The series is enormous fun. And it's still going on. You can subscribe to Season Two here.  Or you can wait for Saga Press to release the real book of Season One this June.