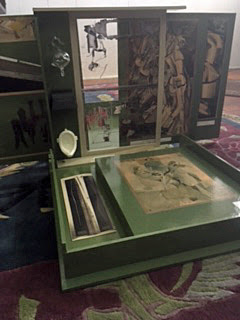 The world, as Robert Lewis Stevenson famously said, is full of a number of things...

Today, I am happy as kings because Marianne gave me a reproduction of Marcel Duchamp's "Boîte-en-valise."

The original "box-in-a-valise" was a museum in a box, containing miniatures or reproductions of all of Duchamp's most famous works. It was created in the 1940s and Duchamp eventually made (with the help pf Joseph Cornell) and sold some 300 of them.

Duchamp is best known, perhaps, for signing a urinal and submitting it to a major art exhibition under the title "Fountain," an act widely taken as establishing that art was anything an artist said it was. (To my mind, it would have been a far more subversive act had he signed the urinal with his own name rather than a scrawled "R. Mutt," but that chapter of the art history books has already been written.) But "Boîte-en-valise" was a shrewder response to the artistic winds of his times.

An artist I know likes to say that the history of art in the 20th Century is all a hysterical reaction to the inventions of photography and mass-produced images. Who needs a Courbet when an Instamatic and a willing subject will get you the same results at a fraction of the cost? Why spend a fortune on an original Paul Émile Chabas when a mail-order poster looks just as good?

This explains a lot of things, including landscape art, performance art, and the flight from representation.

Duchamp, more canny than most, embraced the mass-production of art -- to a degree. It was a shrewd move.

And there's no getting around the fact that the box is a fun little toy to play with.

Above: There it is, the distinguished thing. Not the miniature "Fountain" at the lower left.

Posted by Michael Swanwick at 1:48 PM