An Ice Volcano on Ceres 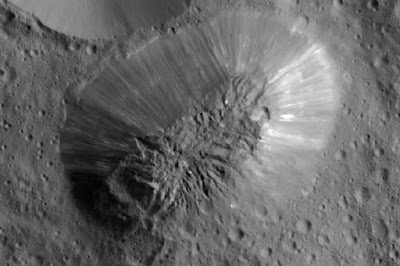 In Hal Clement's Half Life, people are dying off in droves from autoimmune diseases of unknown origin. Knowing they don't have long to live, a group of scientists decide to dedicate their remaining time to sheer hedonism. And what's the most fun you can possibly have? Obviously, basic research.

And, by God, he made an expedition to Titan to perform basic research sound like enormous fun. I admired that novel greatly.

Sometime later, I wrote a story called "Slow Life," which was set on Titan. In homage to the master, I named the spaceship the Clement and the lander the Harry Stubbs. Harry Stubbs being the rean name of the man behind the pseudoym. Sometime between the writing of the story and its publication, I ran into Harry and told him I'd done this and gushed about how wonderful his novel was.

Harry was pleased. "It's good to hear one of my other novels get praised for a change," he said. Referring obliquely to Mission of Gravity.

That was Harry's last Worldcon. Any other writer would have died just before I had the opportunity to pass along news of my homage. But Harry was a gent. And being there to hear my praise was his last gift to me.

This morning came news that there's an ice volcano on Cerees! This is astonishing. The science fiction community has collectively assumed that the dwarf planet would turn out to be a dented hunk of rock -- much as we now know Vesta is. But Ceres keeps coming up with surprises.

And the first thing I thought of when I read the news was thatHarry Stubbs would have gotten a kick out of it.

You can read the Science article here.

And there are plenty more to be found.


Above: Ahuna Mons. Not active. But still impressive.

It seems that every object in the Solar System is unique, and can only be broadly classified into groups. There are surprises all over the place.

I'd forgotten the Hal Clement touches in that story. Which is one of my favorites.

That's a very peculiar mountain. I remember speculating, when that photo was first published, that it looks like an extruded plug (the grooves = slickensides = evidence of movement in that direction). But, how do you extrude a conical plug?

Did any of the stuff you read suggest a mechanism? Dilating iris below? "We've got a planetary sphincter here...."

"Knowing they don't have long to live, a group of scientists decide to dedicate their remaining time to sheer hedonism. And what's the most fun you can possibly have? Obviously, basic research."

Well, duh. And so much more optimistic than your craven Chicxulub-watchers! Of course, the time scale for them was a little shorter.... ;-]