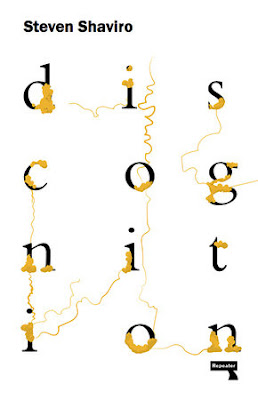 Look what arrived in the mail yesterday!

I suppose this requires some explanation. Steven Shaviro (it says on the back cover) is the DeRoy Professor of English at Wayne State University. He has a particular interest in the philosophy of thought and admires science fiction. Discognition is an exploration of sentience through the medium of several science fiction texts.

Why science fiction? Because in matters regarding consciousness, awareness, feeling, knowing, and the like, there is consensus on pretty much nothing. SF, which has the freedom of doing without things like evidence or proof, is free to speculate wildly. And thus, for those who wish to think about such matters, it provides a means of thinking beyond the boundaries of what is known.

Back in 1995, I attended the World Science Fiction Convention in Glasgow. I was staying in a cheap B&B on Renfrew Street at the highest point of the city and from there could look down on its streets and byways. I saw how the M8 Motorway cut through a vibrant city and how it was lined by vacant buildings for a block to either side. This wasn't supposed to happen when the road was built. It was an unforeseen consequence nonetheless.

Later, I was on a panel on neural enhancement. It went well. We all said interesting things. At the end we were asked to sum up our thoughts and I said that the advantages of neural enhancement were so great that it was going to be inevitable. "But," I said, "we have to be extremely cautious and careful in its adaption, or we'll end up driving an M8 Motorway right up the center of our minds."

This insight stayed with me. I mused over it for a couple of years and then I wrote "Wild Minds," a story that still pleases me today.

Some time later, Shaviro wrote about my story on his blog, putting its issues in context. This became the core of chapter 5 of his book.

I haven't read all of the book yet, but the chapter Shaviro dedicates to Peter Watts' Blindsight is good enough that I rather wish it had been extended to include Echopraxia, the sequel-or-maybe-second-half-I'm-not-sure-which to the first book.

So it's a good book, I think, and I'm looking forward to reading the rest of it.

As for the chapter dedicated to my story... it's always a pleasant surprise to have somebody take one's thoughts seriously.

Here's something I didn't know until I sold "Wild Minds" to Sheila Williams at Asimov's. I'll start by giving you the opening of the story:

I met her at a businesspersons' orgy in London.  The room was in the back of a pub that was all brass and beveled glass, nostalgia and dark oak.  The doorkeeper hesitated when it saw how many times I'd attended in the last month.  But then I suggested it scroll up my travel schedule, and it saw that I wasn't acting out a sex-addiction script, but properly maintaining my forebrain and hindbrain balances.  So it let me in.
Inside, the light was dimly textured and occasionally mirrored.  Friendly hands helped me off with my clothing.  "I'm Thom," I murmured, and "Annalouise . . . Enoch . . . Abdul . . . Magdalena . . . Claire," those nearest quietly replied.  Time passed.
I noticed Hellene not because she was beautiful – who pays attention to beauty after the first hour? – but because it took her so long to find release.  By the time she was done, there was a whole new crowd; only she and I remained of all who had been in the room when I entered.

In the halfway room, we talked.


When next I saw her after selling the story, Sheila looked amused. "You know, Michael," she said, "I don't normally buy a story that opens with a sex scene. That's almost invariably the mark of amateur writing."

Which was the fist I knew about that. But I know it now and so, too, do you.