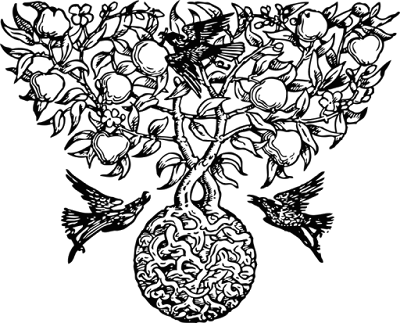 Not long ago, Marianne published her smallest edition ever -- an art book titled Fallen Leaves, which was issued in an edition of twenty, of which seventeen were offered up for sale. The costs of producing it being what they were, it was Dragonstairs Press's priciest (though still, her advisors argued, underpriced) book to date. And it sold out in less than twenty hours.

Those who know Marianne can predict where this is going.

As atonement for making a book which some could not afford and hardly any had the opportunity to buy, Marianne has created a new chapbook titled Five Seasons, containing five related flash fictions, all written by me. Signed and numbered in an edition of one hundred, hand-sewn with appropriately crimson thread, it sells for only five dollars, plus one dollar for shipping in the US or two dollars elsewhere in the world.

Or, for free, you can read the first section here.  It's titled...

I crave thy pardon, mistress, that I did try to eat thee.  It were the Darkwinter, when we all do what we must to survive.  I understand why thou dost flinch from my touch.
Still.  Didst thou not kill thy sister, who did love thee, when the foodstuffs ran low?  Not that I disapprove.  It were the right thing to do, God wot.  Hunger knows no morals.  I did the same with my father, poor soul.
Those dire times are behind us.  The snows are melting at last.  We can scrabble in the mud for last year’s roots, and perhaps a small rodent or three.  We keep our knives sharp and close to hand, of course, because we each know what the other is capable of.
Now the ice turns back into pond water.  The air is warm.  Desperation falls a day, a second day, a third into the past.  Now at last – though I grip my blade as firmly as thou dost thine – I am free to say . . .
I do love thee.

Which, okay, yes, is a little grimmer and more cynical than I usually go. But you should see the other four!

Those who wish to buy a copy of the chapbook can find the Dragonstairs Press website here.

Just a quick comment: I love your Dragonstairs Press books!

The press is Marianne's, so most of the credit goes to her. I'm just the in-house writer.