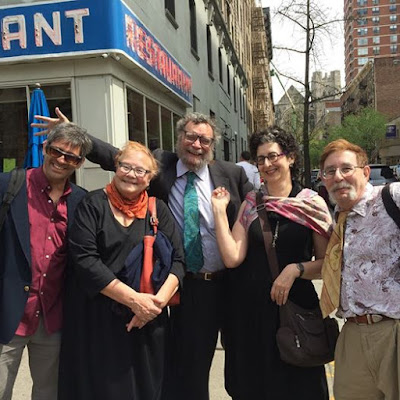 There was a memorial for the late David Hartwell in New York City on Monday, the third such I've attended, and there will be more. David was an important figure in the field. Afterward, six of us went out to lunch together. We had a pleasant time, enjoyed it greatly, and many interesting things were said. However, I didn't take notes, so the following fictionalized account will have to do instead.

"Who wants what?" Gordon asked. As the god of industry and organization, it was his job to impose some semblance of order on the luncheon.

"I want a reign of blood and death," Marianne replied.

"That's what you always ask for," Ellen said. "Just once try the salad." She was the goddess responsible for organic foods, natural fibers and the like. There were times when she envied the hell out of Marianne, but there it was. What could you do?

"Six martinis and a bicycle horn," said Michael. He was the trickster of the group.

"Make that one martini and the mushroom risotto," Gordon told the waitress."David?"

"Croque Monsieur," David said. Nobody knew what he was the god of, but it seemed to have something to do with wine and foods with foreign names.

When the food arrived, they ate, as gods do, avidly and with great satisfaction.

"You were in China last year, weren't you, Marianne?" Ellen asked. "How was it?"

Above (l-r): Gordon Van Gelder, Marianne Porter, Michael Swanwick, Ellen Kushner, David Axler. Photo by Delia Sherman. Delia would have been in this story if she'd been in the photo. But there it is. What can you do?

What? No fish? By the way, if you by some chance happened to write a monograph on Eddison along the lines of the one you did on Cabell, that would be pretty cool....

That's definitely a better menu than Tom's Restaurant (aka "Tom's Diner" aka the FTL-travel Seinfeld restaurant).

That's definitely a better menu than Tom's Restaurant (aka "Tom's Diner" aka the FTL-travel Seinfeld restaurant).

We ate at Le Monde. Fewer of those riffraff time travelers there.