Lock Up Your Asimov's Readers' Awards -- H'ard and Andy Are Come to Town! 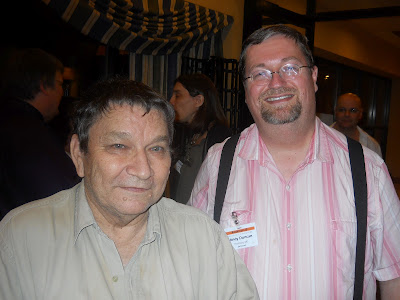 Look at those two rogues... uh, great writers... up above. Those are the immortal Howard Waldrop and the almost-immortal-getting-there-right-soon-now Andy Duncan.  I was chatting with them in the bar at some damn convention or other and took it into my head to whip out my phone and take their picture. "Don't they look like two Depression-era grifters?" I said to the first person I showed it to. And to the second... And to the fourteenth... At which point, I finally realized that my subconscious was trying to tell me there was a story there.

So I wrote the opening page or two and showed what I had to Gregory Frost. Who is a terrific writer and a good friend and has a particularly fine ear for regional dialect. I suggested a collaboration. We swapped ideas. We made stuff up. We laughed like hell.

We had a lot of fun writing "Lock Up Your Chickens and Daughters -- H'ard and Andy Are Come to Town!"

Back when I was in college, there was a fifteen-year-old girl who was the terror of my otherwise libertine friends. She was underaged, hot to to trot, and had a thing for college boys. Oh yeah, and her father was the sheriff. I shaved a couple of years off her age and slung her into the story to give the otherwise self-assured H'ard and Andy something to worry about.

Greg, meanwhile, had been researching the Dust Bowl for a different project he had going and suggested we set the story there and then. He was the one who came up with the Dust Giant scam and H'ard's marvelous dance.

Beyond those two things, though, I couldn't tell you who wrote what. It's all kind of mixed together and swapped about. But I can tell you that the story is pretty much the most flat-out fun thing I've ever (co-) written.

So it pleases me enormously to learn that it made it onto the finalists list for the Asimov's Readers' Award. Which means, apparently, that those who read it agree with me.

You can read about the award (and admire the other stories that made the list) here. Or just go to www.asimovs.com, wander around, and maybe buy yourself a subscription to Asimov's. You've done worse things in your time.

And you can read the story itself for freebies, here.

Voting is closed and the winners will be announced in May.

This is my second blog post of the day. If you scroll downward, you can read the first one, about my forthcoming new collection, The Dala Horse.

Just in case you don't scroll down and read to the end, I should mention that I'm going to be at Boskone in a mere eight days. If you're going to be there too,, why not say hi?

I figure you might just as well empty out your wallet and hand it all over right now, and save everybody a lot of trouble.