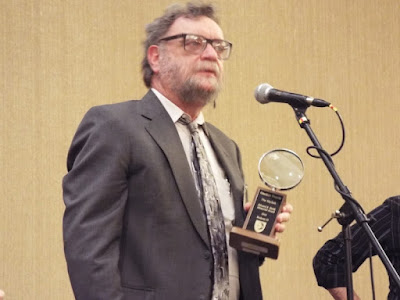 Gardner Dozois has accepted so many awards on behalf of other people that it felt strange to perform that same chore for him. But it was one of those good news/bad news situations. The membership of the New England Science Fiction Society had decided to give Gardner the Skylark Award, for services to science fiction, and Gardner was distinctly tickled by the honor. Alas, only days before Boskone, a family crisis arose and he had to cancel his hotel reservation and train tickets.

Gardner being Gardner, of course, when he asked me to stand in for him, he said, "I don't know why they're giving this to me. I've never done anything to deserve it."

So at the ceremony, after a loving peroration by David Gerrold and a brisk lecture on the dangers of the award by Bruce Coville, I accepted on Gardner's behalf, saying, "I promised Gardner that I would say that he's sure he did something to deserve this award. If you agree, please clap."

The applause was thunderous.

The Skylark Award, named in honor of uberpulpster E. E. "Doc" Smith and incorporating a magnifying glass in honor of his Lensman series, is famed as one of the most dangerous trophies in the world. Gardner will doubtless place it in the window of his apartment, where it will focus the rays of the sun into a white-hot point that will set the walls ablaze, killing everyone in the building in an inferno that will spread to all of Philadelphia and collapse the world economy, ushering in a centuries-long era of plague and apocalyptic despair.

So, ironically, this probably won't work out well for him. But when all is said and done, it's the honor that matters, isn't it?


Above: Photo by M. C. Porter, paparazza to the stars.

Posted by Michael Swanwick at 12:41 PM

Well, Michael, I think you should have worn your Tiger tie! Woo-hoo!

OK, time flies. But we should remember the immortal words of Dave Barry:


"What I look forward to is continued immaturity, followed by death."

The solution is simple, as Connie Willis once pointed out. Gardner should stick the lens where the sun doesn't shine.

Congratulations on the Skylark Award. It could not have been given to a more deserving writer/editor!

I do have quibble, though. On his blog, Michael Swanwick quotes you as saying, "I don't know why they're giving this to me. I've never done anything to deserve it."

If you said that honestly, you may be suffering from the literary equivalent of dysmorphia. You are likely the best editor in all of science fiction. If not the acknowledged best, you at least are vying for #1 spot with Joseph Campbell, Fredrick Pohl, Terry Carr, and Damon Knight.

You are also one of the very best writers in the field. Lafferty is my favorite author, but you convey emotions with far more subtlety and realism. David Brin has a beautiful gift for describing action sequences, and you’re better at that. Howard Waldrop—well, I’m not exactly sure what you do better than Waldrop, but I’m sure there’s something. You are on the same level as him, which is very high praise indeed.

You have inspired generations of writers, directly through your editing and publishing, and also by example through your own prose. You are one of my (and many, many sf readers' and writers') literary heroes.

So yes, you have done something to deserve this. Lots and lots of somethings, really."

Michael, please ask Mr. D., having scooped up this well-deserved award, to please take the time to write something! I still get chills when I think about "Chains of the Sea" after all these years.

"A Special Kind of Morning" is one of the best read-aloud SF stories. I often read it to others to show them just how good traditional, old-school SF can be!