"Talking To Strangers Is Forbidden" 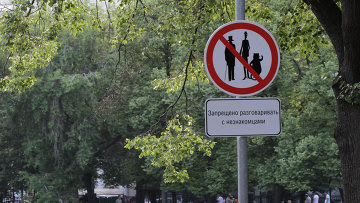 Even the city government of Moscow agrees this is a good hack.

Pictured above is a prank street sign showing profiles of Woland, Koroviev, and Behemoth from Mikhail Bulgakov's masterpiece, The Master and Margarita, and the slogan Talking to Stranger is Forbidden.  This was surreptitiously erected next to Patriarch's Ponds, the park where the novel begins.


Moscow being one of the great literary cities of the world, the sign is being allowed to stay.

I feel rather moved by this because when Marianne and I went to Moscow a couple of years ago to research Dancing With Bears, Patriarch's Ponds was the second place (after Red Square) we went to see.  After we found the park bench where the action begins and the corner where the old woman spills the sunflower oil, we walked back to our flat on the Garden Ring by a roundabout way -- and came upon Beria's mansion.

The whole time Bulgakov was writing his novel about the Devil wandering about Moscow, he was living only a few blocks from Beria.

Now they're both dead and only one of them has flowers on his grave.  May all such stories end as well.

Above:  If you haven't read The Master and Margarita yet, allow me to point out that Behemoth is a cat who wears a bow tie and carries a Browning automatic.  'Nuff said.