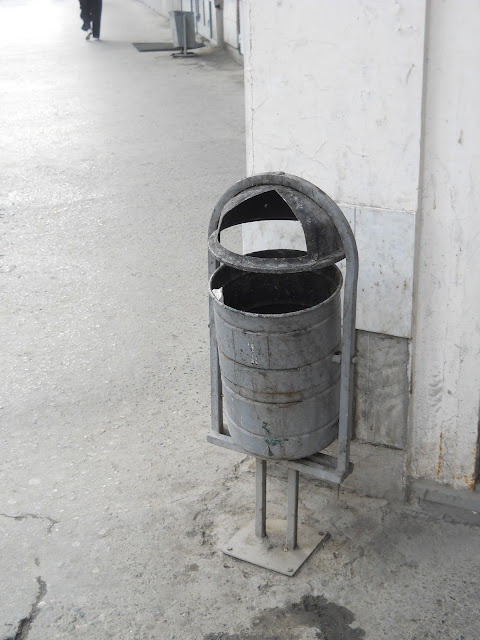 It's always sad to encounter a destitute robot.  Here's one I saw begging for rubles on the streets of Ekaterinburg.

And speaking of what I'm writing these days . . .

One of the many ways you can divide stories is into those that require some analytic thought on the part of the readers if they want to fully understand them and those whose intentions should be lucidly spelled out so that nobody could possibly miss them.  A good example of the former would be Gene Wolfe's "Fifth Head of Cerberus," which can be reread many times without exhausting its riches.  For the latter . . .  One of G.K. Chesterton's Father Brown mysteries, say.  Or pretty much anything by P.G. Wodehouse.

Neither mode is the "right" way to write, of course.  Or the right thing to read.  Sometimes you're in the mood for something difficult and involving.  Other times you want something that goes down easy.  Always, you want the story to be good of its kind.

I've been thinking about this particular dichotomy because I've recently finished one of each type of story and for one of them the editor (after indicating he would buy it) had a couple of questions about the plot.  Had it been the for-lack-of-a-better-word art story, I probably would have gone with what I'd written.  But the story in question being a for-lack-of-a-better-word entertainment, I'm going to have to spend a few hours today revising it to make sure that there's no possible room for misinterpretation.

If there's one thing both types of story have in common -- other than that they should be written as well as possible -- it's this:  When the final draft is finished, it's important to read the whole thing through out loud.  It's astonishing how every mistake and infelicity of language pops out at you when you do.

I'd love to be able to read both versions. Interesting thoughts.

Reading out loud is essential for catching errors. Yes.

As to layering versus a straightforward story, I find that readers of Abyss & Apex can be fans or either style or fans of both. What I find amusing is that the most vociferous lovers of the straightforward story form complain loudly when I publish something layered. Meanwhile those who yearn deeply for complexity are appalled when I publish a simple but well-executed tale. Thank you, thank you, for voicing your opinion that neither sort of writing is better.

When the final draft is finished, it's important to read the whole thing through out loud. It's astonishing how every mistake and infelicity of language pops out at you when you do.

I teach a lot of college freshmen, and I tell them this, every single class, repeatedly. (They're only writing essays, not stories, but it's equally true.) I think very few of them follow the advice, however many times I stress that it is the one thing they can do that will really, truly, no-question help.

(I am curious, however, if it's true for ESL students writing in English (and similarly for other writers in second languages), of which I usually have a few. My guess is that it's not, but I don't really know.)

Oh, and what Chad Hull said. Maybe in a story collection?