A Sad and Lovely Tale 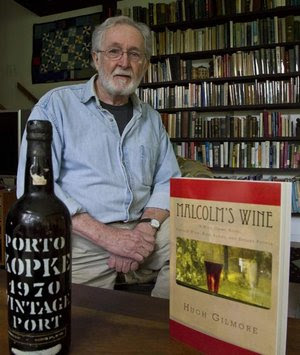 In this morning's Philaelphia Inquirer, there's an article about Hugh Gilmore, who once ran one of my favorite used book stores ever in Chestnut Hill, and who has self-published his a novel inspired by the death of his son Colin who was killed by a drunk driver at age 18.

No parent ever really recovers from that kind of loss.  Over the years, Gilmore wrote two novels containing a character who has lost a son, and began a memoir, none of them published.  A year and a half ago, he decided to try his hand at a mystery.

In 1970, when Colin was an infant, Gilmore bought a bottle of vintage wine, Porto Kopke.  "I put this down to give to him when he turned 21," he says, setting the inky black bottle with the desiccated lip on the table.


The wine served as a symbol for all the sweetness he would never taste watching his son grow into a man.  In the novel, the bottle is stolen and the father sets out after the thieves.


When Malcolm's Wine was finished, Gilmore sent out something like a hundred queries to agents (agents are far harder to acquire than publishers), with no luck.  So at the urging of friends he self-published the book.  In February, a friend who runs a literary arts center held a book launch for him.

So far, the book has sold about fifty copies on Kindle and another fifty print-on-demand paperbacks.  That's probably not enough to cover the costs of self-publishing.  "I sell as many as I push," Gilmore says.

So is this a sad story or a happy one?  I can't decide.  One hundred sales, including friends and people who were curious to see what a launch party was like and may never actually finish the book is a negligible readership.  On the other hand, without the ability to self-publish, the book would have gone into the drawer and probably never come out.

But it's a story that I think all new writers should contemplate long and hard before deciding to self-publish.

You can read the newspaper article here.


Above:  Photo by Darren M. Warren, staff photographer for the Inquirer.  I'm pretty sure this is fair use, but if I'm wrong I'll take it down immediately.

Well I think he just sold his first copy to Germany :-)

If you end up admiring it, let us know.

And another copy in Virginia. :-) --Mario