The Higgs Boson (Sort Of) Explained 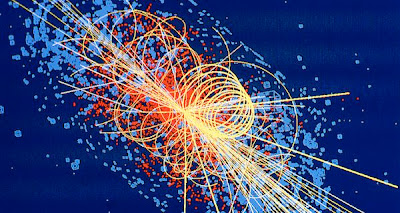 When I was young, I followed physics closely.  Even when it got extremely weird, I was there on the sidelines cheering it on.  But then by slow degrees it became unmoored from physical consequence.  Branes, dimensions folded in upon themselves, string theory -- famously derided as being "not even wrong" -- and the like were inherently neither provable nor falsifiable.  By their very nature, we were never going to know for sure.  So I let my level of interest downgrade to "casual."

The CERN Super Hadron Collider, however, is Old School in that it involves actual experimental data.  So I was happy to find a short animation explaining the Higgs boson in words so simple that I can follow them.

Mind you, this is not the Higgs boson as physicists themselves know it.  But it's nice to have a glimmer.

You can view the video here.

I'm on the road again!  Just a day trip to NYC this time.  I'll let you know all about it tomorrow.

I'll post the answer to that Monday, Eileen. Keep watching the skies!