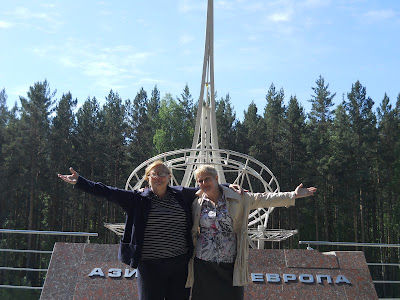 Aelita is over.  It wound up today with a picnic.  Which seemed appropriate since I'm currently reading the new translation of the restored text of Arkady and Boris Strugatsky's Roadside Picnic.

First, however, the group went to White River Cemetery to visit the graves of Vitaly Bugrov and Igor Khalymbadga.  both of whom were very important to Urals science fiction.  Bugrov was an important bibliographer who assembled the first comprehensive list of Russian science fiction.  Khalymbadga was the founder of Aelita and the first editor of Urals Pathfinder magazine.  The graveyard, like so many in Russia, was a forest, thronged with trees and grave markers.  The gravestones were cleaned and flowers laid down.  Then, after a respectful visit, we moved on.

Our destination was the monument marking the dividing line between Asia and Europe.  That's it up above.  But first we had to stop at the Memorial Complex for Victims of Political Oppression, honoring those killed in the Terror from the Thirties through the early Fifties.  Nobody really enjoyed this but it being there, we had a moral duty to stop.  The complex, a small portion of which you can see below, is chiefly a memorial list of the names of 18,474 people from Sverdlovsky Oblast and the Urals Region who were killed for political reasons during Stalin's rule.  Some of them were shot at the site of the memorial.

We all returned to the bus in a somber mood. 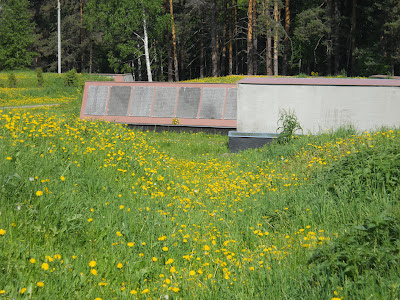 Finally, the picnic!  Food, good company, and lots of talk.  You've been there yourself, so you know.  The formal highlight of the picnic was the awarding of the Aeliter Award.  Or rather awards.  There was an Aeliter Award for most drunkenness during the convention and an Aeliter Award Second Class (which I persist in thinking of as the Aelhalfliter Award) as well, the first of which was filled with wine which the recipient had to down immediately.

I shall resist documenting the winners' names because they might someday apply for work with an employer who reads English.  Nor will I mention the name of the foreign national who was given an Aeliter Third Class medallion.  I'm sure it was only bestowed out of a misplaced sense of kindness anyway. 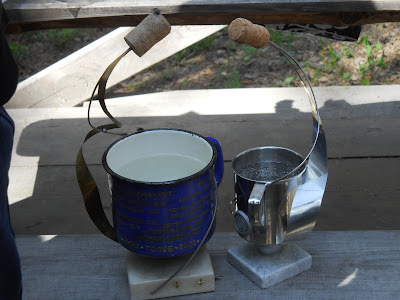 Immediately above:  Note the plastic flies on the tip and base of the first-class Aeliter.

Thanks for the articles and photos about Aelita!
A small error - you confused Bugrov and Halymbadzha. Bugrov was the editor of "US" and the founder of Aelita and Halymbadzha - bibliographer.

Wow. No wonder I was never a newspaperman. Thanks for catching that. I'll see if I can correct it in the text soon.