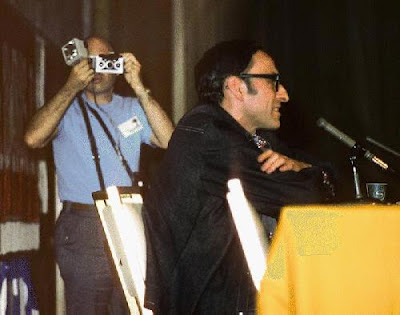 Jay Kay Klein died this past Sunday, May 13.  That's him up above, photographing Roger Zelazny at Discon II, the 1974 Worldcon, and it's how those of us who knew him will remember him.   Jay Kay was not a great photographer, but he was an important one.  For something like fifty years, he carried his camera to science fiction conventions and snapped photos of writers and the other denizens of our subculture.  He took thousands of photographs over the course of his life and consequently preserved a slice of our literary heritage.

I vividly remember one conversation with him at the 2000 Worldcon in Philadelphia.  J.K. was feeling nostalgic.  "I was at the first Philadelphia Worldcon in 1953," he told me, "and I know things about it that nobody else remembers."

Rest in peace, Jay Kay.   You're not forgotten.

I'm on the road.  I'll be home tonight and at the Nebula banquet on Saturday.  But on Monday I fly to Ekaterinburg for Aelita, Russia's oldest science fiction convention, and I won't be back until June 1.  I'll do my best to post from Russia while I'm there but the Intertubes haven't reached the degree of saturation in Siberia that they have in the States.  So there may be some lengthy silences ahead.