A Literary Oddity: The Corrector of Destinies 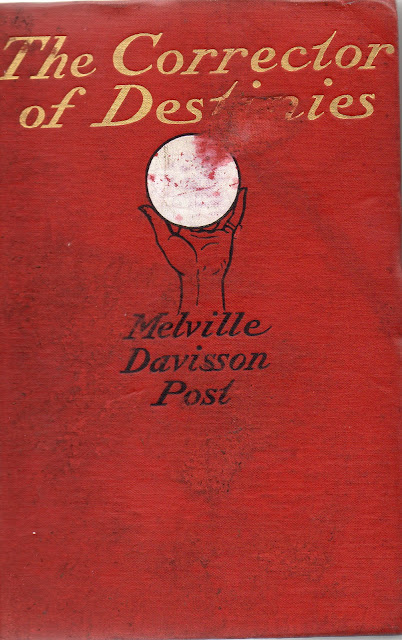 I have been reading The Corrector of Destinies by Melville Davisson Post.  It is an odd book indeed, a collection of stories written perhaps a hundred years ago that are very like detective stories but are not detective stories, and even more like mysteries, but only because they're not much like anything else.

Luckily, the stories have a formula, so they're easy to describe.  The narrator is Courtland Parks, secretary to the brilliant but frigidly emotionless lawyer Randolph Mason.  Clients driven to impoverishment and desperation by the machinations of some unscrupulous fraud or criminal, seek out Mason, hoping against hope that he can restore their fortunes.  After (rather perfunctorily) determining that their cause is just, Mason haughtily issues instructions that seem to achieve the exact opposite of what is desired.  When he is obeyed, however, he reveals that through a technicality of the law, the deed signed is not valid, the check will not be honored, the will must be overturned.  Then, after the grateful client goes away rejoicing, the legal citations are given so that the curious (and judicially literate) may verify the legitimacy of the ploy.

Such legal loopholes, a reader cannot help but think, could equally easily (and far more profitably) be abused.  And, indeed, my research determined that the first two volumes of Randolph Mason stories had him advising criminals on how to break the law with impunity.  Apparently Post's editor had a  few words of good advice to share between volumes two and three.

One of the charms of a mystery story is trying to figure out whodunnit or whydunnit or whatever the mystification is that the writer sets before you.  Followed by the satisfaction of admiring his or her cleverness.  But unless you are, as Post was, a lawyer, you have absolutely no chance of guessing the solution before it's presented to you.

And yet the stories have a certain charm.  I confess to liking them a lot and for much the same reasons one likes a well-crafted mystery story.

Even though, as I said, I don't think they're really mysteries.

An engaging essay by Joseph Bottum on Mason, with emphasis on his Uncle Abner stories, can be found here.

This kind of story reminds me of some science fiction from the 1950s and 60s. I'm thinking particularly of stories by James Gunn from this period. The protag finds himself in some kind of bizarre setting or situation, the narrative basically just reveals an explanation of this situation, and finally the protagonist either goes nuts, runs away or adapts to the weirdness. (c.f. "Every day is Christmas.") It seems like a lot of Twilight Zone episodes were structured like this too.

It makes me think of the television show House, M.D., where one can seldom solve the mystery without a medical degree (and perhaps not often with one). And yet more time is devoted to medical jargon and loving animations of liver cells than in any other doctor drama I can think of.

At least as of a couple of years ago, House was The Most Popular Television Show in the World. The World. The WORLD. It is remarkable to me that an outspoken atheist who solves incomprehensible technical mysteries would be a popular hero across national, continental, and cultural divides.

(Interesting and exhaustive reviews of the medical accuracy of House. My definition of hard science fiction: It is not so necessary that the science be right, as it is that one can have an interesting conversation about whether the science is right or not.)