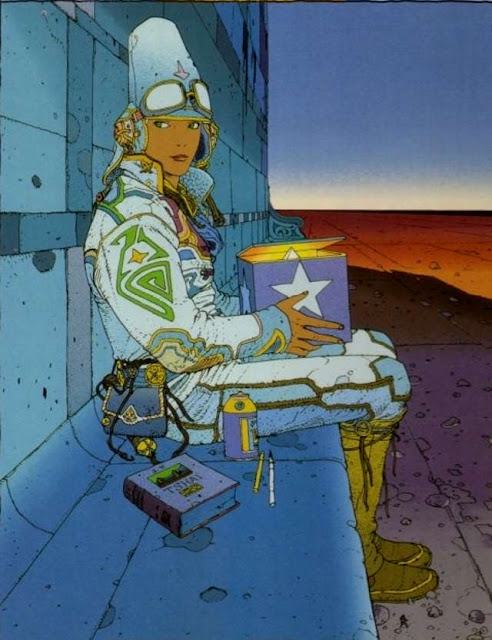 Jean Giraud, the artist best known as Moebius, died the other day.  He was 73.

I only met Giraud once, at a gallery opening for a show of his art, but he impressed me greatly.  We had a brief chat about spirituality and how much easier it is to write a story with a positive message than one with a negative one.  He was serious, open, without affectation.

At the same opening, I was present when Gardner Dozois, then editor of Isaac Asimov's Science Fiction Magazine, told Giraud he'd love to commission some magazine covers from him.  "Unfortunately, we pay in peanut shells and stale popcorn," he said.  But Giraud assured Gardner that he'd be willing to work below his usual pay level because he wanted to break into the book cover market.

Alas, though he tried mightily, Gardner couldn't get the art department to go along.  The art was too colorful, too inventive, too distinctive.  It didn't look like everything else.  I had a novel serialization coming up in Asimov's at that time, so there's a slight chance that in an alternate universe I have a Moebius cover in my past.  And an even greater one that Gardner that used the cover as a lure to get something spectacular from Gene Wolfe or Ursula K. Le Guin.  The man is cunning.

Now Moebius has left the building.  Travel well, Monsieur Giraud.  May the world you find yourself in be as bright and inventive and involving as the ones you invented for us.

I come up with easy money-making ideas all the time.  Unfortunately, I'm not a money-maker.  So I might as well pass this one on to you:

You know those ugly jackets that emergency response personnel wear a crime scenes with POLICE or FBI or MORGUE or whatever in block letters on the back?  I bet one of those labeled PERP would sell really well.

Better than the one labeled VIC, anyway.


Above:  Star Watcher.  Note the book titled Tshai by "J.V."  Also the little man by her foot.  I have a serigraph of this hanging in my living room.  It doesn't grow old.

On the DVD of _The Fifth Element_ (at least with the extended edition) there's an interview with him and Jean-Claude Mezieres, another significant French comics artist. They had done the productin design of Fifth Element together and they were ridiculously happy to see their worlds come to life. They had been friends since art school and it was a joy to see old friends together celebrating their lives.

(Apparently later there was a lawsuit agains the producerss of the film, but let's fade out on a happy moment...)

> Alas, though he tried mightily, Gardner couldn't get the art department to go along.

#!#!#!#!#! - that's the sound of my teeth grinding with frustration. SF illustration in the anglophone world - particularly America, but certainly not exclusively - is stuck in a terrible rut of photorealistic illustration. (Not that there's anything wrong with realisitc illustration - but there are so many different ways to be good). This is often compounded by low art budgets which don't allow the right amount of care to be taken.

When I see European paperbacks with stylish comic illustrations on the cover I wonder why we can't have the same. I am no wiser now.

Good on gardner Dozois for trying though.

Jeez - so many typos there. Wish I could edit to hide my shame :(

Moebius will be missed. I have a framed poster of the Electra he did for Marvel back in (I think) the late '80s. I've had it that long and you are correct that looking at his art doesn't get old.

Hi, just looked for the Seriegraphie because of i have this sujet as a CARPET 240x160 cm - it was part of an exhibition initated by Jack Lang Minister of Culture in the mid 90ths. 194 different colors are knotted in the carpet. So from 3-4m Distance the Picture is as it is.
Its made by TISCA and has a Signature from Moebius. I move to an other continent now - sombody want to buy can contact me under namshubs@rocketmail.com