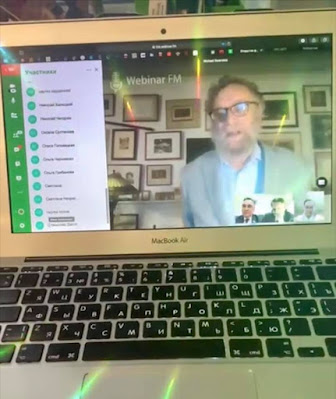 Because of the time difference between Russia and the US, I was speaking from home at 2 a.m. This was a new experience for me and, while it was not as much fun as being physically in Ekaterinburg would have been, it was still a privilege. I spoke briefly about my original experience with Aelita and how much physically and socially has changed since then, but how the core experience of the convention--the passion of the fans and writers for fantastika--remains unchanged.

The above photo was posted by Alexander Gritsenko in Russia and downloaded by me a third of a world away. Have I mentioned what strange times these are?

Posted by Michael Swanwick at 7:15 AM